Like the myth of Pandora, Laura Moreton-Griffiths’ work might be seen as a kind of theodicy, addressing the question of why there is evil in the world. Brought up with a military background – her father was in the Royal Navy and her mother briefly a Wren – discipline and hierarchy were instilled in her from a young age, alongside a notion of patriarchy, which might well have been defined as: ‘blind obedience […]; the repression of all emotions except fear; the destruction of individual willpower; and the repression of thinking whenever it departs from the authority figure’s way of thinking’.[1] A lot of her work is based on arguments she used to have with her father, looking at human kindness and goodness and how ideologies get in the way. A key photographic series, for example, is Portrait as my Father (2016), in which, in the tradition of many female greats such as Claude Cahun, Cindy Sherman and Gillian Wearing, she plays the role of the person she seeks to understand. 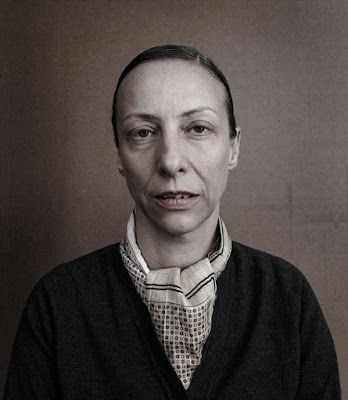 This method seeps through her practice, be it photographic, drawn, installation-based, or performative. Often objects created for one medium will resurface in another. In Machine For Winning (2016), inspired by the 1936 Olympics, Moreton-Griffiths takes on the roles, amongst others, of dictator, spectator and mother. This series also sees her don what she terms ‘a wearable painting’, in this instance an ironically lugubrious smile, adopted from the 1930s’ Budapest Smile Club phenomenon, in which attendees wore the smiles of such characters as the Mona Lisa and Loretta Young, fixed Hannibal Lecter-like over their heads with medical tape, in an attempt to counteract the city’s post-war suicide epidemic.

Moreton-Griffiths’ work reflects the things she is opposed to and thus necessarily deals with issues of conflict, control and politics. She makes a piece with a specific meaning, but then lets it go for her viewers to find a meaning of their own, thus treading the line between personal and societal. Performance is key to her practice and, for this, there must be costumes – and these costumes constitute works in their own right. The Inglory Suit, a Ku Klux Klan hood and duffle coat, for example, or the less Machiavellian Gas Hood, become characters, whom Moreton-Griffiths takes on outings, seeking out and ‘meeting’ other randomly related objects to be photographed with. 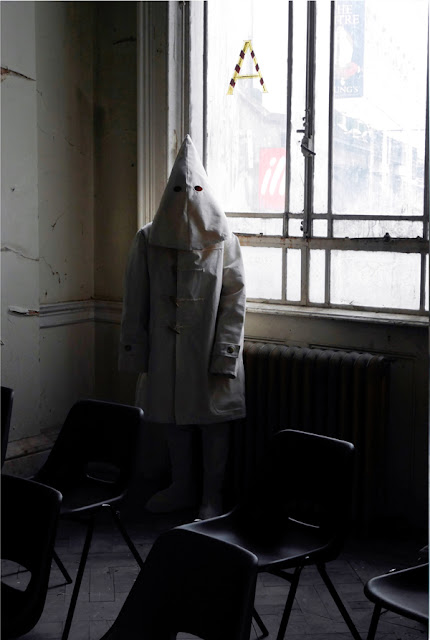 The idea of playing the role of evil, in particular with relation to the Klan, is one that Philip Guston explored back in the 1960s: ‘The idea of evil fascinated me [...]. I almost tried to imagine that I was living with the Klan. What would it be like to be evil? To plan, to plot.’[2] While Guston grew up in Los Angeles, the child of Ukrainian Jewish parents, only too aware of Klan persecution of Jews, Blacks and others, Moreton-Griffiths has no such personal history, simply a keen sense of what is right and wrong in this world and a desire to unpick and understand the seemingly incomprehensible. Discovering her work’s commonalities with Guston’s, however, she took some photographs of herself in performance, wearing Gas Hood and the Klan hood, and turned them into Guston-like drawings. The characters in these – with their echoes of Nosferatu and creeping 1930s’ monsters (read: right-wing ideologies) lurking in the shadows – are now set to pop up elsewhere, so watch this space! 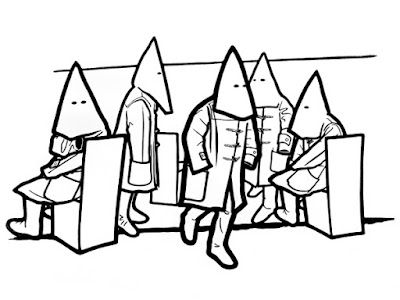 Moreton-Griffiths also works with text – in particular, she redacts certain documents. From the first page of the Human Rights Bill, for example, she has drawn out the words: ‘the incompatability of power to safeguard freedom’. From a page further in, all that remains is: ‘terror terror terror terror terror’ – a very clear echo of the patriarchal repression of all emotions except fear.

Moreton-Griffiths’ work is not all doom and gloom, however, and it bears a strong comic undercurrent. The plain white duffle coat, used as part of Inglory Suit, also appears elsewhere as her father’s arctic coat, and this reappropriation, or alteration of identity, suggests that nothing and no one is necessarily permanently fixed; redemption is always a possibility. Although the opening of Pandora’s box allowed evil into the world, hope remains inside.

Sunk in the Arctic (2016)
From the series: Portrait as my Father
Collaborative digital photographic drawing on Arches Paper
112 cm x 140 cm
© Laura Moreton-Griffiths

A (2016)
Documentation of a performance.
Print on aluminium
30 x 20 cm
© Laura Moreton-Griffiths

For more information on Laura Moreton-Griffiths, see her website