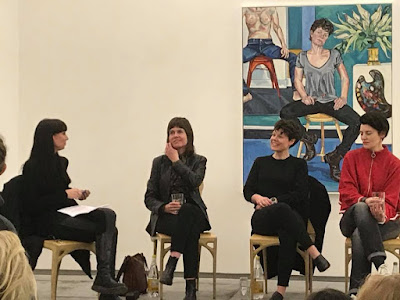 Anna McNay: Let’s look back at how this project came about. You approached me with the idea fairly well conceived. How was it initially born?

Sarah Jane Moon: In a nutshell, a couple of years ago, I organised an exhibition of 12 women painters at the Menier Gallery called ‘12 @ Menier’, which Roxana was also involved with. I thought that as independent professional artists it would be really great to pool our resources to hire a space, rather than hiring one independently, which is quite pricy. I picked artists whose work I admired and we all got together and we really just exhibited whatever we wanted to, so it wasn’t curated in any sense, it was just about pooling our networks and coming together to organise a show. I came away from that thinking it was really great. I loved that we’d made space for women to take up space. I would have loved it more, however, if it were politically more in line with what I see my work as addressing, and I wanted it to be queer particularly.
I’ve always really liked Roxana’s and Sadie’s work and so I sent them an email and asked them if they’d like to do something together, not really knowing what it might be. Then we had a few meetings, where we came up with the idea of painting ourselves and each other, and also of working somehow with the idea of the female nude.
Sadie Lee: That happened quite quickly, didn’t it? I think it was the first time we met in the pub, actually, that we just kind of threw that one out there and it happened. Quite swiftly we came up with the general theme for the show. A one-pint decision.
SJM: We didn’t labour over it for a long time. I can’t remember who came up with it exactly but…
SL: I think we wanted it to be quite structured and not just have work that we’d made before or just sort of cobble things together. We wanted it to have a very clear identity, but also to make work in response to this theme. It’s all completely brand new work just for this show, which we all found quite exciting. We didn’t know what was going to happen. For a long time we were talking about this hypothetical show, hypothetical images, and it was much more about the concept. I mean, we literally didn’t see the work until the night of the private view. We were working that much in secrecy. We obviously sat for each other, but then we had a big reveal. We came down those stairs and saw it for the first time 10 minutes before everybody else did, which was quite shocking.
Roxana Halls: The question about the nude, and what it would mean to paint a nude, as a woman who identifies as a lesbian, was something I’d been mulling over and that we had a very good chat about too. We realised that none of us had painted that many nudes, actually, certainly women in states of undress. I’d painted male nudes before, but the question about the female nude was one that we were all puzzling over.
AMc: And that became a key part of the show, and it’s something we’ll come back to later for the wider discussion.
You’ve mentioned why the exhibition came about specifically in your life right now, Sarah Jane, but also there’s a particular moment for it in the current climate. Last year was the 50th anniversary of the Wolfenden Report and the partial decriminalisation of homosexuality, and a lot was made of this in terms of exhibitions across the country. The report referred, however, to male homosexuality, and this certainly seemed to be at the centre of the majority of the shows. Was this part of what made it seem timely to step forward as three lesbian painters?

SJM: Yes, we really thought it was timely with Tate’s ‘Queer British Art’ show, and we had initially thought it would have been a bit earlier than it was, but these things always take longer to organise than you imagine. So we then had the idea that it would be a good follow-on from ‘Queer British Art’, which cut off at 1967 and, as such, had prioritised gay men and their painting, and so we wanted to have something that was very female and lesbian-centric.
AMc: You’re all very much figurative painters and you’ve all painted your friends, families, and people of varying sexualities before. How much of a factor would you say that sexuality plays in your work?
RH: I think in the way that it’s at the core of your being, it’s at the core of everything, but it may not necessarily mean it would be obvious. I think, with my models, I look more for people who are feminist over anything else. That’s really at the core of things for me. If I were looking for a criterion, I think that would be more important.
SJM: Our work is all quite different but there are these very strong similarities – there’s a sensibility there and a kind of a queerness for me. That is what I really liked about Sadie’s and Roxana’s work, and why I initially approached them was because they’re very out about who they are, and that does quite heavily influence their work, I think. That’s definitely important for me.
SL: Sexuality has always been very important in my work – my early work in particular. I started painting about 25 years ago, and I started out by making self-portraits – self-portraits of myself with lovers – and I worked in clubs so I documented the people that were coming to the clubs. It was just about people that were around me. And then I gradually moved into other areas, like older people and the representation of women in art. It was still about sexuality, but it was about the sexuality of the sitter, not necessarily in relation to me and my sexuality. But it’s always been there in the background. There’s always been some reference to it.
RH: I think the queerness and otherness is there, it’s as present in your work as it is in yourself, whether or not you are explicitly dealing with it as subject matter, it’s intrinsically part of you.
AMc: Was that a theme that you perhaps focused on more in this project than you have done in previous works, given the concept of the show, and given the sitters as well?
SJM: I think that that was something we were really aware of – the commonality of all being women, all being painters, and all being lesbians. We were definitely aware that it would be a show that would have various conversations around those themes. But thinking about my portraits particularly, they’re queer and they’re feminist and they’re lesbian, but I’m not sure how that comes across. I don’t think I heightened that specifically for the show. I was really just aiming to make a portrait of us all individually.
SL: I heightened it! I was all about the sex! Obviously we’re all painters, but the thing that I felt was really cool was that we all identify as lesbians and I really wanted that to be very, very clear in the work. I know and respect Sarah Jane and Roxana, but we’re professional colleagues, we don’t really hang out, so, for the images that I made of them, I projected quite a lot on to them. In a way, it’s about my sexuality and what I want them to be acting out for my sake. I very much directed them and decided how I wanted it to be, and then they played the part of themselves in that project, if you like. I was drawing on my own experiences in my own fields about my own sexuality and then just applying it to them. I don’t know whether it actually applies to them or not, but I wanted it to be really clear that that’s what it’s about.
RH: I’d say there was a lot of overlap with me also. This is the first time that I’ve really explicitly dealt with other people’s visual imagery of lesbians, representation of lesbians, and have used that as part of my work.
AMc: You’ve worked with theatrical stagings, narratives and mannequins before, but this time chose to examine the relationship between male film directors’ representations of lesbian characters and how this imagery is absorbed by audiences. Why was it important that the directors in this instance were male?

With 2017 marking the centenary of the death of Auguste Rodin, many exhibitions are looking back and celebrating the French sculptor’s life. But what of his student, lover, assistant and contemporary, Camille Claudel (1864–1943), who, after the breakdown of their affair and the death of her father, was committed, by her younger brother Paul, to an asylum, where she lived out her remaining 30 years in misery, dying at the age of 78? 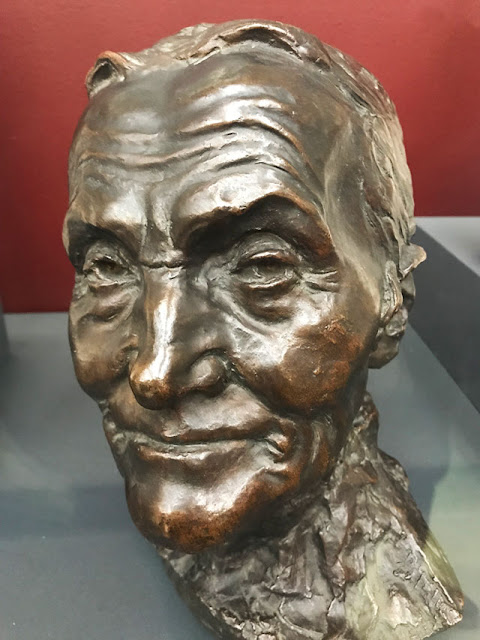 Despite critical acclaim and respect from her peers during her lifetime, her affair with Rodin and her struggles with mental illness have cast a shadow over contemporary interpretations of her work. Her brother, a poet, dramatist and diplomat, to whom she was once very close and of whom she sculpted numerous busts, organised an exhibition of her sculptures at the Musée Rodin eight years after her death, but even he, shortly thereafter, spoke of her life in derogatory terms, saying: “My sister Camille had an extraordinary beauty, moreover, an energy, an imagination, a quite exceptional passion. All these superb gifts came to nothing: after an extremely painful life, it ended in complete failure.”1 And yet there are works that, even today, have not decisively been attributed to either Claudel or Rodin, so symbiotic was their practice and so similar their style.2 Why, then, is she not up there on the pedestal with him?