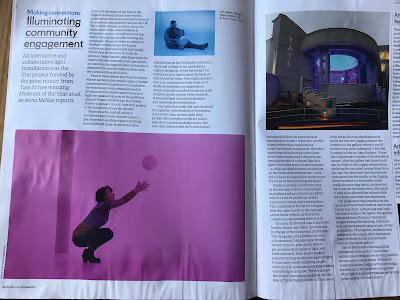 Book Review of The Art of Looking Up by Catherine McCormack 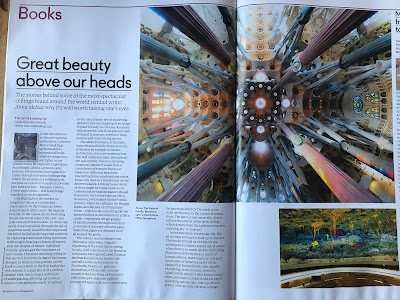 Preview of Tantra: Enlightenment to Revolution at the British Museum, London


Oluwole Omofemi: The Way We Were
Signature African Art, London

Oluwole Omofemi (b1988, Ibadan, Nigeria) always wanted to be an artist, despite opposition from his family. As a child, he learned about the civil rights movement and the natural hair movement of the late 60s and early 70s from his grandfather, who, at the time, sported an afro. Omofemi now uses hair in his paintings as a metaphor for freedom and power, and as a symbol of identity. Some of his series use the more muted palette of the old masters, showing how entrenched identity and culture are in a person’s belief system; others use a brighter, pop art palette, portraying energy and strength and looking to the future. Whatever the style, he considers his work to be African at heart. 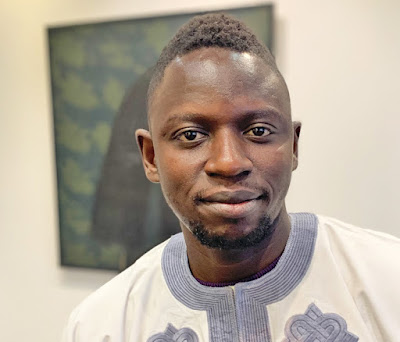 One work in particular stands out from the others on display – In Her (2019), depicting a bald woman set against a bright, almost street art-style background, covered in words such as hope, love, aspiration and queen. This piece is dedicated to Omofemi’s grandmother, who died of cancer, as well as to raising awareness of the disease, and showing that a cancer diagnosis is not necessarily the end of everything: there is always hope. Other works are dedicated to his mother, through the use of floral patterns. In general, Omofemi sees women as close to God, in their ability to love, accept and forgive. This is why the majority of his subjects – and all of those in this exhibition – are female. 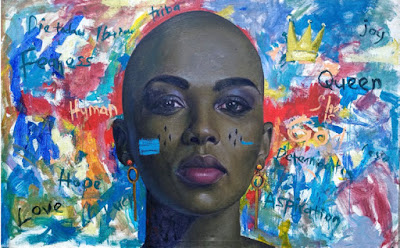 I spoke to Omofemi just before the opening of his first exhibition in London, at Signature African Art’s new Mayfair venue.

Hedda Sterne. “The only female at [the] birth of abstract expressionism.” Friends and neighbours with gallerist Peggy Guggenheim and in the stable of art dealer Betty Parsons. A “great-artist”. 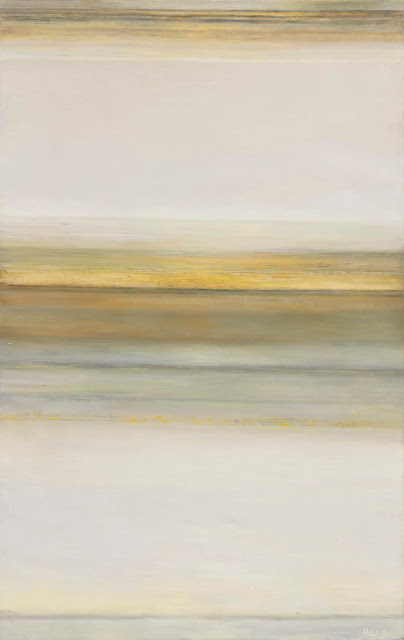 Born Hedwig Lindenberg on 4 August 1910, in Bucharest, Romania, Sterne lived to the grand age of 100, dying in New York City in 2011. She knew she wanted to be an artist from the age of five or six. “I always loved Leonardo,” she told Sarah Boxer, for the New York Review of Books, shortly before she died. “Artists were always referred to as great artists. I thought that’s what the profession was. One word: great-artist. There wasn’t one moment in my life when I thought I wanted to be anything else.” And so that is what she became. She began to make a name for herself in Romania, but it was after arriving in New York in 1941, fleeing Nazi-occupied Bucharest, that things really began to happen. Having married and separated from a man named Fritz Stern, she adopted his surname, adding an “e”, maintaining this moniker, despite her marriage to fellow Romanian artist Saul Steinberg, three years later.

Sterne fell in love with America and painted its modernity from every angle: “The American kitchen, the American bathroom, the American street, you know, its horizontals and verticals, its points and lines. New York was a total delight, a paradise.” In 1950, she was photographed by Nina Leen, along with 14 other artist-signatories – including Willem De Kooning, Robert Motherwell, Barnett Newman, Jackson Pollock, Mark Rothko and Clyfford Still – of an open letter to the president of the Metropolitan Museum of Art, protesting against the museum’s aesthetically conservative group-exhibition juries. The photograph, of which Sterne later said, “I am known more for that darn photo than for 80 years of work,” describing herself as the “feather on top”, was subtitled “Irascible Group of Advanced Artists” and published on the cover of Time-Life magazine on 15 January 1951. Being the only female in the picture garnered Sterne much attention – positive and negative. Lumped together with the abstract expressionists, partly because of her gallerist and dealer, and largely because of this photograph, Sterne always maintained she was not one of the group. “I was not an abstract expressionist. Nor was I an Irascible,” she told Boxer, and, as critic Grace Glueck wrote in 2006: “She has maintained a stubborn independence from styles and trends, including surrealism and abstract expressionism … Although she never developed a signature style, Ms Sterne’s explorations have produced a small universe of evocative images.”

Carmen Neely (b1987, Charlotte, North Carolina) makes abstract, expressionistic paintings that translate poignant memories and experiences into gestures on canvas. In turn, these gestures frequently take on a life of their own, being sculpted into 3D forms, photographed and catalogued, and often, like so many other objects and imagined entities in the artist’s life, taking on names and unique personalities. Neely is a collector: of memories, of objects, of paraphernalia, of phrases. All of these things make their way on to and into her canvases, pushing the boundaries of painting, exploring its sense of timeless self-reflection, and ensuring there is a pure and open honesty in her own self-reflective work. 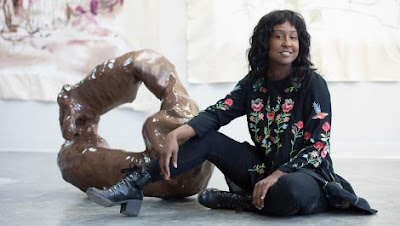 Studio International spoke to Neely by Skype about her practice, the role of collecting and (re)creating characters and identities, and how to be serious about one’s play.

Read the full interview here
Posted by Anna McNay at 20:44 No comments:

Entering the Gallery at Winchester Discovery Centre is currently something like entering a church or sacred space. The lighting is low and focused on the large, arch-topped canvases, created especially for this exhibition by Hastings-based artist Jake Wood-Evans. 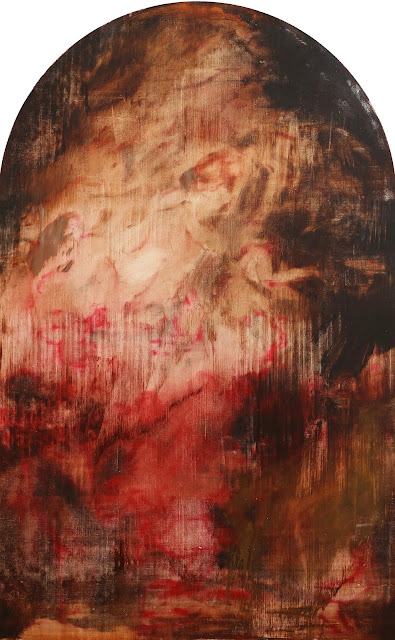 Wood-Evans’s work derives from his fascination with the baroque, especially, in this instance, with the grand altarpieces by the likes of Rubens and Van Dyck. However, after marking out the basic figuration of his version of the painting he is working from, he then sets about removing elements, pushing the paint about in its fluidity, mixed with turps and linseed oil. His resulting imagery sits somewhere between figuration and abstraction – with an element of the meditative – inviting viewers to bring their own interpretation and narrative to the traces and relics of what has been, both on Wood-Evans’s own canvases, and on the canvases of the original paintings, with the passing of time, added layers of varnish, and restorative work, all leaving their mark.

Studio International spoke to Wood-Evans about his inspirations and his process.

Review of Van Eyck: An Optical Revolution at the Museum of Fine Arts Ghent (MSK)

The Ghent Altarpiece (completed in 1432 and inaugurated in 1435) is as known for its eventful history – as the most frequently stolen work of art, with one panel’s whereabouts remaining unknown since 1934 – as it is for its splendour and precise craftmanship. More recently, it has also become a social media sensation, with the Mystic Lamb (the surprisingly tiny central “figure”, representing Christ as the Lamb of God) even being given its own Instagram account, as the ongoing process of restoration has revealed a completely different – and far more exquisite – painting underneath centuries’ of overpainting and oxidised varnish. 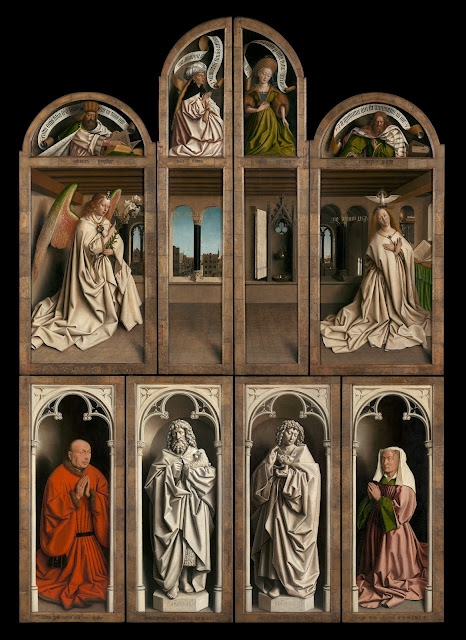 Even after restoration, it still remains a mystery which Van Eyck sibling painted what. The work is thought to have been begun by Jan’s elder brother, Hubert, (c1360/70-1426) about whom little is known, and by whom no further works are thought to exist, and completed by Jan (c1390-1441) after Hubert’s death. There is some suggestion that their two other siblings may also have lent a hand, although only Hubert and Jan are credited in the Latin quatrain on the polyptych’s frame, which calls Hubert the greatest painter there was, and Jan “second in art”. The consensus, however, is that the majority of the work was undertaken by Jan. To celebrate the near completion of this restoration project – which has taken longer than planned due to its unexpected complexity – and the opening, in October, of a new visitors’ centre in St Bavo’s Cathedral, for where the altarpiece was commissioned, and to where it will return, the former capital of Flanders is celebrating a year’s worth of Van Eyck-themed festivities, exhibitions and events, under the (somewhat cringeworthy) header of #OMGVanEyckWasHere. At the heart of this is the exhibition, Van Eyck: An Optical Revolution, at the Museum of Fine Arts Ghent (MSK), which, for the past eight years, has housed a studio for the restoration work, visible at all times to the public.

Norman Cornish (1919-2014) was born into a mining family in Spennymoor, County Durham, as the eldest of seven children. Aged 14, he had to leave school and go and work in the mines. He was, however, also a keen artist, and, through sheer determination and drive, simultaneously forged a career drawing and painting. After 33 years in the pits, he retired due to chronic back problems, and was finally able to dedicate himself full time to his art. His sketches of workers in the pub, playing darts or dominoes, of locals queuing at the fish and chip van, and of his wife, father and children, paint the portrait of a place and time and are as synonymous with the northeast of England, as LS Lowry’s are with the northwest. Nevertheless, despite numerous honorary doctorates and an MBE for his contribution to art, his renown seems more locally bounded. This is something that his family hope to change, and, with 2019 being the anniversary of his birth, they helped put on an array of exhibitions and establish a permanent trail in Spennymoor, taking visitors to key sites where Cornish worked. 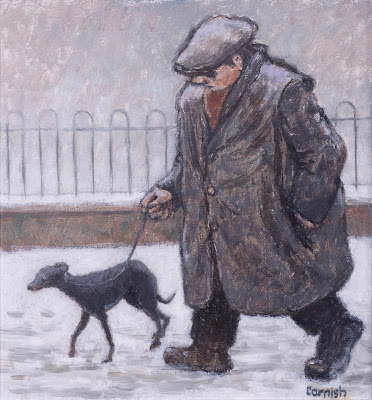 I spoke to the artist’s son, John Cornish, about the celebrations – some of which are still ongoing, his father’s legacy, and his own memories of family life.