Reviews of Ruskin's Turners at the Fitzwilliam Museum, Cambridge, and An Elegant Society: Adam Buck, Artist in the Age of Jane Austen at the Ashmolean Museum, Oxford

The exhibition in the Belgian Pavilion at the 56th Venice Biennale offers a complex exploration of the consequences of political, historical, cultural and artistic entanglements between Europe and Africa during the time of colonial modernity and its aftermath. It is a project that connects not only with history but also with the present situation, since, as curator Katerina Gregos reminds us: “Amnesia is a very, very dangerous thing.” 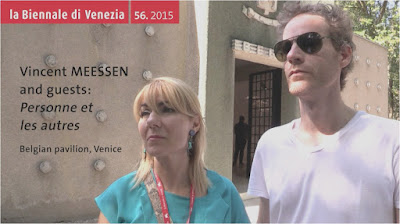 Not wanting to perpetuate the 19th-century “nation-state” model, still used by so many of the national pavilions in Venice, artist Vincent Meessen (b1971) has stepped back from the limelight and invited 10 further artists – from four continents – to show alongside him, challenging the notion of exclusive authorship. This idea is further reinforced by the borrowing of the exhibition’s title, Personne et les Autres, from a lost play by the Belgian art critic André Frankin. “This title is a metaphor for the position of the artist, within the context of a national representation,” clarifies Gregos.

The centrepiece of the exhibition is a new audiovisual work by Meessen, which revisits the role of the largely unknown Congolese intellectuals within the Situationist International movement. Meessen worked with the author of an unpublished Congolese protest song from May 1968, reinterpreting the text in the form of a rumba.

Studio International spoke to Meessen and Gregos about the ideas behind the exhibition and the role of the spectator, exposed to the “sharing of a collective intelligence”, and invited to become “a character in the show”.

Linda Ingham is a visual artist and curator, who exhibits nationally and abroad. She has work in several public collections. Ingham lives and works in her coastal studio in northeast Lincolnshire. The south bank of the Humber estuary has been a constant accompaniment throughout her life, as has the industry and traffic that it supports. The near horizon of the north bank informs much of her imagery, as do the flotsam objects brought to the shoreline. The passage of time, location and place is represented in Ingham’s work through process and systems of recording and the use of materials, such as jet, gathered from the beach; silverpoint and handmade gesso; and collage from antique books. Her drawn and painted constructions are often gathered together as composite pieces and installations, which may change over time. Self-imagery is also a regular feature of her work. Her works for Shifting Subjects include a telephone table containing a book filled with transcriptions of conversations she had with her mother and a pair of profiles, shaped from her cast shadow, filled with the abstracted landscape of the Humber. 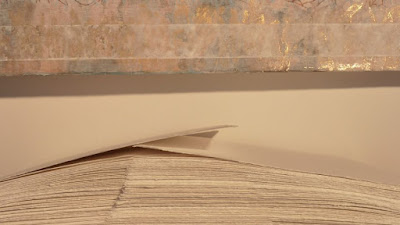 Anna McNay: You speak of your work ‘concentrating on place and time through conversation and autobiography’. Is it more a case of using place and time to help define an uncertain and shifting identity, or do you use your identity and sense of self to try to grasp such ephemeral concepts as time and space?

Linda Ingham: I think this depends, as I have used self-imagery in several series. The Profile Pieces became my way back into something alluding to self-portraiture but in which the image of ‘me’ is actually closer to being subtracted; a ‘space’ shaped a bit like me. It is more about using place and time to define identity. I tend towards a depressive nature and swing between putting myself out there and wanting to hide. The collaged elements and stylistic references to my home landscape put something of ‘me’ into the Profile Pieces. I’d like to think that the inclusion of this material in some way resonates and communicates something to the viewer – maybe a sense of authenticity? It doesn’t matter to me that the viewer can’t see what the material is and I don’t think it is necessary to know this in order to have an understanding of the work. I like the idea that not everything within the work is on show; I like the hidden.

You can read the rest of this interview in Aesthetica here.

Review of Facing History: Contemporary Portraiture at the Victoria and Albert Museum

At first glance, the 34 silhouettes are identical reproductions; look a little closer, however, and there are minute differences – hairstyle, direction of gaze, the fall of the light across the woman’s shoulder. This series of portrait miniatures, Made Up Love Song (2011), portraying V&A visitor services assistant Sophia, is the work of the V&A’s 2011 photography artist-in-residence, Bettina von Zwehl (b1971), and its acquisition sparked the idea for this tightly curated, artistically and politically astute display, Facing History: Contemporary Portraiture, which comprises about 80 prints and photographs, drawn from the V&A’s collection, spanning the past 20 years. 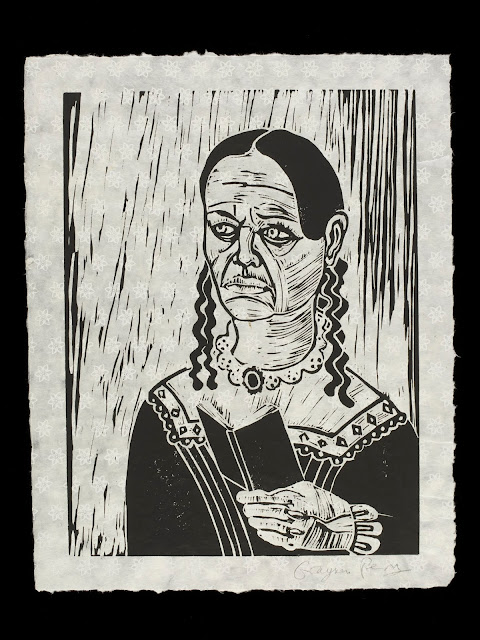 Interview with Charles Lim at the Pavilion of Singapore, 56th Venice Biennale

With his sailing background, Charles Lim explains, he sees the sea as ‘just an office’. His 10-year-old, 10-part project, Sea State, explores the biophysical, political and psychic contours of Singapore, which this year celebrates the 50th anniversary of its independence

Sea State takes as its starting point the question of how to represent the sea. Singapore is an island state and port that grew out of a long process of land reclamation, so the sea is key to its identity, just as it is to artist and former Olympic sailor Charles Lim (b1973). His 10-year-long project grew out of a residency in Thailand, where he was introduced to the Mekong Project, looking at the river, and the 10 parts of Sea State reflect the meteorological measurements for sea conditions, ranging from calm to stormy. The premise of Lim’s project is to invert people’s perceptions of sea and land, and it includes a barnacle-covered buoy, made as an exact replica of one that went “missing” as part of a political cleansing act; archival material and maps; photographs; a large-scale installation piece mapping Singapore’s sea floor; and film work, looking at such processes and issues as land reclamation and sand piracy.

"My paintings have neither objects, nor space, nor time, nor anything – no forms. When you give up the idea of right and wrong, you don’t get anything. What you get is rid of everything, freedom from ideas and responsibility.”

Agnes Martin was born in 1912, to Scottish Presbyterians, on a homestead in Saskatchewan, Canada. Her early years recalled Little House on the Prairie, living in hardship in an enormous and radically empty landscape. She later denied that this – or, indeed, any biographical element – played a part in her artwork. “Inspiration,” she said, “is the beginning, the middle and the end.” This inspiration would come to her like the Immaculate Conception, complete, but the size of a postage stamp. She would then scale this up to her imposing six-foot square canvases – a little larger than her body, representing her reach in the world. 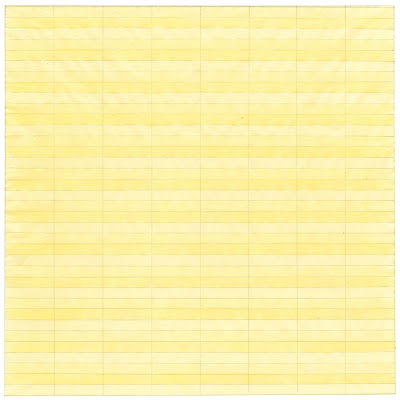 Vehemently as Martin rejected autobiography, her schizophrenia clearly had an impact on her work. Her grid-based drawings and paintings might be read as a way of regulating or mediating the noise, but they are neither symptom nor cure of her illness. She was a sophisticated artist and a rigorous self-editor, who destroyed anything not quite up to the mark.

Martin denied being lesbian. She also denied being feminist. Once she even claimed she was not a woman. Nevertheless, she is known to have had romantic relationships with several other female artists and rumours even suggest a liaison with her first dealer, Betty Parsons.

Having lived for many years in the Mexican desert and painted right up to the very end, Martin died in 2004. The current exhibition at Tate Modern offers a chance to experience first hand the uninhibited freedom she sought to conjure through her work.

Now in its fifth year, L Fest continues to blossom. From one good-sized event back in 2010, The World of L Fest now runs three international events, the L Fest Foundation and the L Fest awards. This year saw the addition of the DIVA Art Award and, from five strong competitors, a winner and a runner-up have now been chosen.

First prize undisputedly goes to Jen Orpin for her breathtaking renderings of light and shadow in her oil paintings, M60 Rain & Shine (2012) and Big Trees (2014). Leonardo da Vinci once wrote that light and shade should blend “without lines or borders in the manner of smoke” and Orpin certainly achieves this in her atmospheric works, each of which captures a fleeting moment in time. 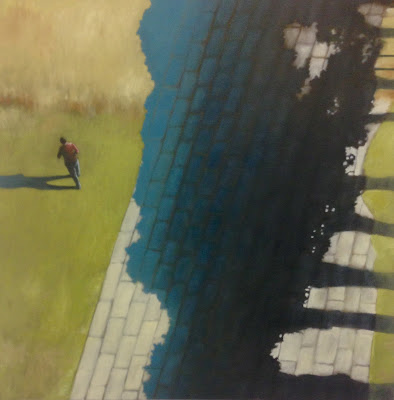 Orpin graduated from Manchester Metropolitan University in 1996 with a degree in Fine Art. She joined Rogue Artist Studios, Manchester, in 1999 and has been painting from her studio there ever since, exhibiting both locally and nationally. Her work has featured in the last three series of BBC1’s Last Tango in Halifax and both series of Russell T. Davies’ Queer as Folk. A DIVA award, it would seem, is long overdue.

The runner-up award goes to Giselle Louise Ryan for her luscious, bold and vibrant paintings, made using resin on canvas. Her work has been described as “like Georgia O'Keeffe on acid” and there is a seductive, feminine fluidity to it. “The process,” she says, “is very intuitive and I roll with what feels right.” Before applying the resin, Ryan colours it with various media: oil, acrylic, ink – and sometimes even bodily fluid. With a background in sculpture and ceramics (Melbourne University, Bachelor of Education, Visual Arts, 1994–1998), it is perhaps not surprising that her 2D work today has such a glaze-like finish.

Congratulations to both of our winning artists in the inaugural DIVA Art Award!

facebook.com/jenorpinpaintings
Jen accepts commissions, including for baby portraits and landscapes