Review of Portrait of the Artist: Käthe Kollwitz at Ikon Gallery, Birmingham

“I was determined to be an artist from the outset, even though I had the disadvantage of being a girl.” 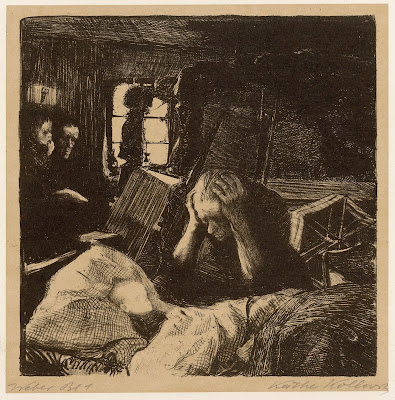 Her gender was not Käthe Kollwitz’s only disadvantage as a graphic artist (at a time when this was the least prized – and least well paid for – of the visual arts), living in the "bohemian" workers’ district of Prenzlauer Berg, Berlin, and surviving two world wars. This aside, she enjoyed, from the outset, the support of her family, husband, and friends. Thanks to this, her determination, and, in no small measure, her talent, Kollwitz (1867-1945) met with great success. Today, she has four museums dedicated solely to her work and, in her native Germany, there are 40 schools that bear her name. In 1920, she became the first woman to be elected to the Prussian Academy of Arts, an honour that brought with it a full professorship, albeit that she rejected the title owing to her communist leaning for egalitarianism. Her work was shown in New York in 1922, she was the subject of many books and articles, and the first big monograph on her work was published as early as 1923. Despite her prints being widely reproduced in China and Russia, she is sadly little knownin the UK, where only three of her drawings – and not all that many of her prints – are held in public collections. This enlightening and carefully selected exhibition has been put together in collaboration with the British Museum – comprising 36 works from its collection, plus four loans – by Frances Carey, the former deputy keeper of prints and drawings. Marking the 150th anniversary of Kollwitz’s birth, it will tour to the Young Gallery, Salisbury; the Glynn Vivian Art Gallery, Swansea; the Ferens Art Gallery, Hull; and end up "home" at the British Museum in 2019.

In 1898, Gustav Klimt (1862-1918) designed the poster for the first exhibition held by the newly founded Vienna secession, of which he was a founding member and president. The depiction of the Greek hero Theseus wrestling the Minotaur symbolised the intention of the young avant-garde movement to break with the past and rebel against the out-dated structures of the Künstlerhaus. On the right-hand-side, standing watch is the figure of Pallas Athena, the goddess of wisdom, craft, and war in ancient Greek mythology. Turned thus into a sphinx-like demon, an image that was repeated on the catalogue for this first exhibition, as well as on bookplates for the movement, the goddess emerged as the patron saint and symbol of the Vienna secession. Klimt’s use of symbolism embodied one of its key ideals. 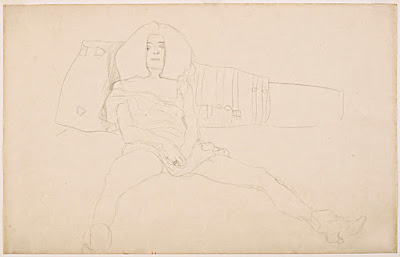 Ian Hoskin had the embryonic idea for his latest photographic project, Ladies First, shortly after finishing his degree in 1981. He began identifying areas of gender difference that interested him but was unable to find the right way of translating the idea into a coherent series. Some three and a half decades later, he has designed a workable format and structure for the body of work, namely 50 composed scenarios making up 25 pairs of contrasting gender images. Each image of each pair is displayed above a line of text; the texts within each pair are almost identical, differing only with regards to the gender they relate to: “she” or “he”. Anna McNay spoke with Hoskin ahead of his forthcoming exhibition at Atom Gallery. 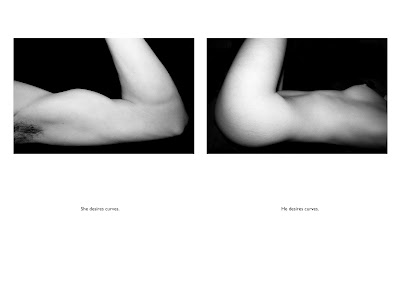 ‘It's absolutely impossible, but it has possibilities.’

These words from the film producer Samuel Goldwyn might equally have been uttered by the painter Aisling Drennan, whose colourful, layered Abstract Expressionist-style canvases are a series of endless possibility, of unresolved experimentation, of contumacious contradictions. Constructing and deconstructing, concealing and revealing, Drennan’s mark-making creates both chaos and structure, a concoction of intuition and organicness, submitted to analysis, until some form of resolve is determined. Never a fixed conclusion, however, or, as Samuel Beckett writes: ‘Ever tried. Ever failed. No matter. Try again. Fail again. Fail better.’[1] 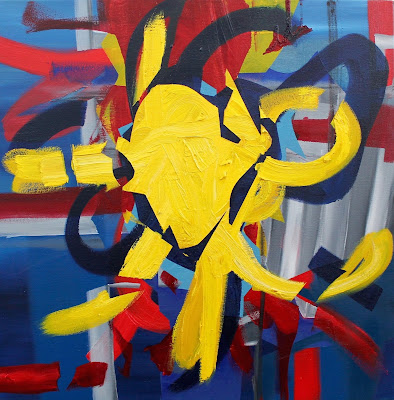 But, to the viewer, Drennan’s paintings are far from being failures. The vast, freewheeling swathes of paint sweep you up, taking you, willing or not, on a stormy journey, a rollercoaster ride, across and deep within the canvas, destination unknown. As painterly, or malerisch, as Drennan’s surface brushstrokes might be, there is nevertheless a depth to her canvases, with their partially visible geometric lines and boxes, drawn in charcoal, à la de Kooning, leading you within, underneath the waves, drowning you in the intense primary colours that ‘pop’ against one another in a playful, sometimes seemingly reckless, way. ‘You have to have colour and light,’ Drennan exclaims. ‘My god! And yellow is just a feel-good colour, really. It physically makes me happy to look at it.’ But reds and blues, ochres, and sometimes blacks, rear their heads as well, like animals from within, each opening a dialogue, interrupting, rejoining, and drawing the others into a spirited conversation, a song, or maybe even a dance. The choreography is free, but there is an underlying internal logic, a set of steps and movements that may be exploited and utilised in infinite combination. Drennan paints always at arm’s length, from the shoulder and elbow, avoiding the contrivance of anything produced too painstakingly close up. Nevertheless, there is a beautiful concentration as she works steadily, aiming for the marathon, not the sprint. ‘Without leaps of imagination, or dreaming, we lose the excitement of possibilities. Dreaming, after all, is a form of planning.’[2]

The lyricism of a painting extends beyond the individual canvas, with one work leading on to the next, which is born, inevitably, out of a ‘niggling’ point of its predecessor, begun before its parent is fully matured. The process is empirical, as Drennan takes, reappropriates and develops: ‘There is no performance – it’s all one big rehearsal’. The subject she seeks to explore is the very stuff of painting itself: its materiality and physicality. The only narrative is a narrative of process, of exploration and development from one work to the next – from one layer to the next – building up memories and traces, a series of wounds and scars, with new life blossoming afresh at each turn along the way. A work may take months to complete, as she applies masking tape, charcoal and coats of oil paint, before removing the tape, applying more paint, often time and time again, ever reassessing, redirecting, accepting the inevitable but entirely unpredictable happy accident. In an age of digital perfection, Drennan is an artist to whom the term ‘practice’ – with all the inherent hope, failure, and possibility – truly applies.