This is the first major monographic exhibition of work by Vanessa Bell (1879-1961), and the curators, Sarah Milroy and Ian A C Dejardin, are at pains to emphasise their wish to separate Vanessa Bell the artist, and Vanessa Bell’s art, from the many stories and dramas surrounding Vanessa Bell the person, as part of the Bloomsbury Group. Certainly, her work deserves attention – “Vanessa Bell the painter was as radical as Virginia Woolf the writer,” wrote the Guardian critic Fiona MacCarthy, when Bell’s work was shown as part of The Art of Bloomsbury at Tate in 19991 – and she stands strong as an artist in her own right, not just as the sister of Virginia Woolf, the wife of Clive Bell, or the lover of Roger Fry and Duncan Grant. Nevertheless, no matter how hard one tries – and the curators of this exhibition really have tried – her art cannot be separated from her life. In fact, even they concede as much in the “At Home” section of the exhibition, where they portray the complex (or, perhaps one could argue, remarkably simple, in the way she lived them out) interpenetration of her roles as mother, wife, lover, sister and artist. 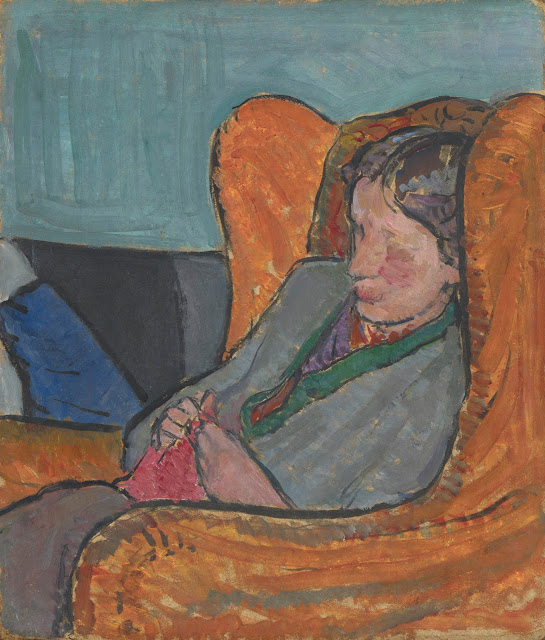 What defines a successful art project? One where the works all sell? Or one where public opinion is changed and a new form of acceptance is born? In 1972, the Peter Stuyvesant Foundation launched City Sculpture Projects, an ambitious endeavour that led to the installation of public sculptural works by 14 artists in eight cities in England and Wales, for a period of six months. A towering five-metre-tall King Kong in Birmingham, a revolving cone in Plymouth, and a conceptual enquiry in Cardiff were among the commissions realised – but many deemed the project a failure, since none of the works was acquired by its respective local council, and all were accordingly removed at the end of the six-month run.

Nevertheless, the project has had a lasting impact. “It was the moment when sculpture everywhere, but particularly in Britain, became recalibrated,” says Lisa Le Feuvre, Head of Sculpture Studies at the Henry Moore Institute, Leeds, where an exhibition is currently being held, commemorating the artistic and social experiment. “What we love more than anything [at the Institute] is contesting possibilities of sculpture. The ambition of the 1972 project was to show cutting edge sculpture, outside of London, at a street level, city-oriented and also viewer-oriented.” 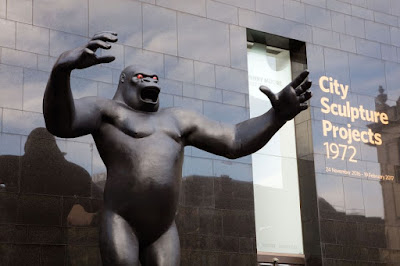 At the time, the project was well-served by the art journal Studio International, which ran a 14-page special issue, featuring texts by the artists involved, including some whose commissions were not ultimately realised. These pages are on display now, alongside cuttings from local newspapers, photographs, a slide show of footage and maquettes – some remade especially for this exhibition. Outside the Institute, the colossal King Kong towers ominously, attracting visitors, firstly for a selfie, and then, with any luck, through the gallery doors. The artist behind the enormous ape is Nick Monro, now a reclusive physicist, living in a cottage in Dorset, with no hot water or electricity. His research into perpetual motion seeks to disprove Newton’s Third Law. At the time, however, when briefed to produce a “city-oriented” work, he decided, in a deliberately facetious manner, to make King Kong, as a “city-disoriented” response. Built out of fibreglass, the huge creature was scaled up from a tiny maquette, entirely by using a tape measure and squinting. After his stint in Birmingham, it lived, for three years, with a used car dealer, before moving to the Lake District, from where it ventures for the first time for this exhibition.

Liliane Lijn’s six-metre-high revolving steel cone, cut through with layers of Perspex sheet and neon, was born out of her thinking around cosmological phenomena. “You can never finish a point,” she says. “It goes on to infinity.” For this reason, she blunts the point of her cone, making it parallel to the base and to Earth. The lit up elliptical lines are like planetary trajectories. Lijn remembers how people kept asking her what her work was in aid of, not quite grasping the concept that it was “just” art. After Plymouth, White Koan was shown for six months on the terrace outside the Hayward Gallery, London, then at the Globe Theatre, before finally being purchased by the University of Warwick. “It’s very popular now. I don’t want to be immodest, but it’s really captured the imagination of the students. They really own it. They have a Koan site on Facebook and on Twitter.” 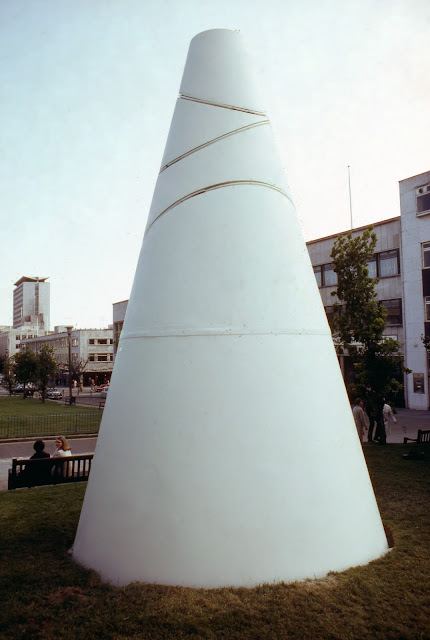 Garth Evans, whose 12-metre-long steel construct was intended to speak to Cardiff’s industrial roots, was brave enough to loiter, the day after installation, and take a microphone around asking people for their opinion of his work. He made a point not to refer to it as “sculpture” or a “work of art”, asking only “What do you think of this?” Similarly to Lijn’s experience in Plymouth, the Cardiffians were struggling to come to terms with what this actually was, many deeming it “rubbish”. The recordings now form part of the retrospective exhibition at the HMI and have also been used by Evans since to create a tongue-in-cheek work in which the sounds emanate from a rubbish bin, as well as being published in a book and turned into a stage production.

At the time, there was no follow-up to or evaluation of this ambitious project, and Le Feuvre, and curator, Jon Wood, see that as the role of this exhibition – albeit some 45 years after the event. This time-lapse, however, might be seen to attest to the power and lasting legacy of the project, which, if not an obvious across-the-board success, certainly opened up discussions about the role – and mere existence – of abstract art in the public realm. Some may not have seen the point, but the few who did set the ball rolling. One archive newspaper cutting tells, for example, of the lollipop lady in Birmingham who donated £1 to a campaign to save King Kong.

“Is part of the power of the legacy of this project because the sculptures didn’t stay?” ponders Le Feuvre. Had they been seen every day since, become part of the furniture, as it were, perhaps their potency would have faded. But by living on solely in the memory of those who witnessed them, they have gained a certain status, as symbols of change. “Had they been there longer, people would have grown fonder,” posits Lijn. And this has certainly been attested to by the response of Warwick students to the potential removal of White Koan – they went on strike! It will be interesting to see how the public responds to the removal of King Kong from outside the HMI at the end of this exhibition. While we often might not notice something until it has gone or is under threat, this is one public sculpture, which has consistently drawn a crowd.

As artists continue to be priced out of even the farthest reaches of London’s boroughs, and many move down to places on the south coast, such as Hastings, it seems there is something of a revived rural exodus to mirror that – or, more correctly, those – of the early- to mid-20th century, when numerous artistic communities established themselves in the county of Sussex, with guilds, enclaves and retreats. Exemplifying the many faces of modernism, these various groupings might, at first glance, seem as different from one another as chalk and cheese, but biographical and conceptual links can be made, weaving a deft narrative of the period and its protagonists, and this is precisely what the sixth annual exhibition, in the successful winter exhibition programme at Two Temple Place, has achieved. The result, Sussex Modernism: Retreat and Rebellion, brings together painting, film, sculpture, furniture, music and photography from more than 30 lenders and nine museums and galleries. What the curator, Dr Hope Wolf, describes as a “visual cacophony of styles and media” is contextualised against the late-19th-century interiors of the London venue, making visible the very style from which many of the artists included sought to depart. 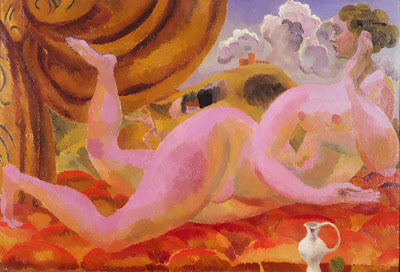 Candida Powell-Williams has long seen sculpture and performance as inseparable. Her current immersive installation at Bosse & Baum in Peckham, South London, brings together multiple elements, including both of these, as well as moving image, an artist’s book and even other artists’ editions, produced in an Exquisite Corpse-type manner throughout the duration of the exhibition. 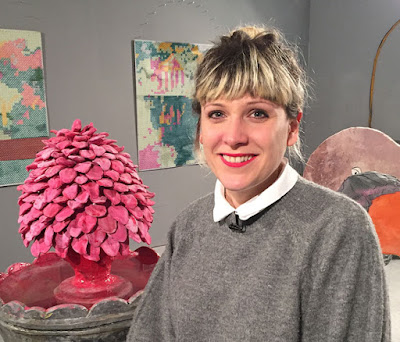 Her second solo show with the gallery, The Vernacular History of the Golden Rhubarb grew out of a year-long residency at the British School in Rome, during which Powell-Williams collected implausible stories, documented in such a way as to make them believable. She became fascinated, primarily, by the objects and relics at the heart of these tales, and, in particular, by tourists’ behaviour in response to them. A performance workshop, held before the exhibition opened, offered participants the opportunity to interact with her sculptures, and footage of this has been drawn over and turned into gifs, which can be viewed by scanning QR codes in the gallery foyer. It was important for Powell-Williams to incorporate this public choreography as a work in its own right, rather than just through documentation. Similarly, she is producing an artist’s book, which, on one level, will act as an instruction manual for interacting with the exhibition, but, on another, will be an objet d’art itself.

Referencing well-known and lesser-known touristic objects from across Rome, represented here in a colourful manner, against a grey archaeological site backdrop, with de Chirico arches and cross-stitched frescoes from the Villa of Livia at Palazzo Massimo, the installation invites viewers in to explore and interpret to the best of their knowledge, adding a sprinkling of their own imagination to complete and enhance the already bizarre tales.

Powell-Williams showed Studio International around and explained some of her inspirations.