06/08/12
Jenny Saville
Modern Art Oxford
23 June – 16 September 2012
Jenny Saville (born 1970) is often credited, along with other feminist artists, with a re-appropriation of the female figure, “by shifting the female body’s position as an object of male delectation, and thus, deconstructing the male fantasy projected for centuries on it.”[i] Her paintings of oversized, fleshy, distorted female bodies have been described variously as “embody[ing] disgust,”[ii] constituting “strategic interventions [that] disturb dominant ideals of femininity,”[iii] and as “every woman's nightmare: vast mountains of obesity, flesh run riot, enormous repellent creatures who make even Rubens's chubby femmes fatales look positively gaunt.”[iv] Indeed, Saville herself uses words such as “mutation, transition, ambiguous… anything that is against normality,” continuing “I find the narrow version of normality quite boring. I like extreme humanness.”[v] She also claims that her paintings, despite being figurative, have a landscape quality to them, and it is certainly true that their scale is so overwhelming to the viewer standing before them that she loses her sense of proportion and scale in much the same way that 18th century viewers did when standing before immense and sublime landscapes by artists such as Caspar David Friedrich (1774-1840), J.M.W. Turner (1775-1851) and John Martin (1789-1854). 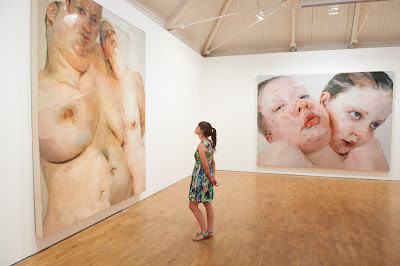 This summer, Modern Art Oxford is hosting the first solo exhibition of Saville’s work in a UK public gallery, tracing her practice from the early nineties to the present. Her canvases seem almost to expand to fill the gallery walls, reaching from floor to ceiling, and having required disassembling to get them through the low doors.
The upstairs gallery exhibits some of her early work, such as Trace (1993), where the mottled flesh on the back of a large woman is seen, somewhat too close for comfort, with the imprint of a bra, elastic waistband, and knickers, as if recently removed, and just that little bit too small for their model. This fascination with corpulence and marking up the body is something which Saville furthered the following year, in New York City, by spending time observing a plastic surgeon at work. Her experiences of watching this process permeated much of her work for the rest of the decade, and, although the best-known examples are not on show here, we do see elements of the influence in, for example, Ruben’s Flap (1998-1999), a collage-like painting where body parts overlap and immense breasts heave, and Fulcrum (1997-1999), where bodies are piled up in a manner recollecting the concentration camps of World War II, except for the fact that, skewed and foreshortened, they appear almost morbidly obese. The greenish tinge to this work is echoed in a number of others, giving the flesh, in each instance, a repulsive pallor, and yet a simultaneously compelling allure, capturing, at once, both life and death, and the tenuous boundary in between. 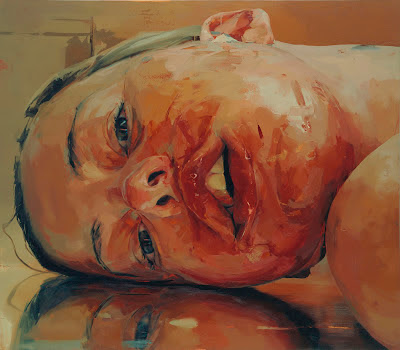 Further transgressions are made in Saville’s works depicting transsexuals and intersex subjects, one of which, Passage (2004-2005), is on display here. A male-to-female transition, the model is shown with both a real penis and fake breasts. 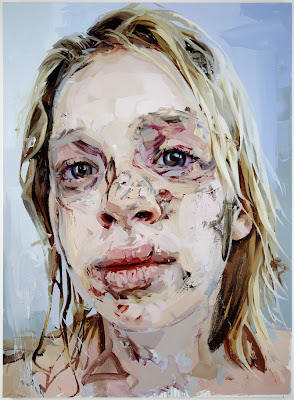 As well as her full-bodied images, Saville has also produced a series of works depicting damaged faces, where the subject has clearly undergone some kind of trauma. Entry (2004-2005), for example, shows a scabbing wound, and the vicious red colour of Fig II.23 (1997) vividly evokes a feeling of heat and scorched skin. The glazed gaze piercing outwards from this canvas is another common feature in Saville’s work, repeated in the Stare series of paintings and sketches, of which three are included here. The misty eyes, along with the paint surface, as damaged as the skin it brings to life, suggest head injury. The only matt surface in these works is the hair. 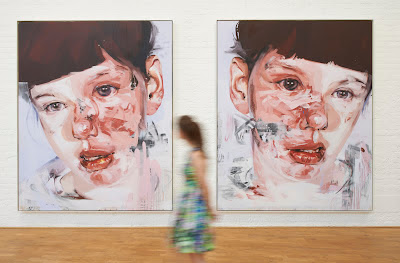 A recent development, or one might say change of direction, in Saville’s work, was prompted by the birth, in fairly quick succession, of her son and daughter. Motherhood imbued her with an incredible new confidence – “I just felt like I was flying!” – and so she began to directly reference art history in her own works. In addition, in an attempt to capture the movement of the wriggling and squirming infants she wanted to depict, and to speed up the process of completing a work (Fulcrum had taken her 18 months, and, as she recognised, 18 months in the life of a baby brings about monumental change!), she turned to drawing rather than painting. And thus were born the works shown in the downstairs gallery at Modern Art, which include Study for Isis and Horus (2011), in which her own and her child’s bodies are superimposed over the Egyptian goddess and her son, again in an almost collage-like manner, and Study for Pentimenti I (2011), which is all about movement and mark-making. The baby’s gripping fingers and curling toes, as he struggles to escape his pregnant mother’s grasp, set it apart from the placid portrayals of the miniature adult infant Christ throughout the early history of Madonna and Child imagery, upon which these sketches are based.
By flouting the “rules” of traditional nude painting, the responses evoked by Saville’s oversized works do indeed engender disgust and repulsion (or what Julia Kristeva would term “the abject”[vi]), but , at the same time, there is, as Saville herself says, a real sense of still “wearing the myths of femininity.” With this comes an inevitable and seductive allure. Her paintings will shock and appal, but intrigue and make you want to go back for more. Humanness, through Saville’s lens, could certainly never become boring.