“When I was coming out,” recalls photographer Tom Dingley, “I was repeatedly challenged because I didn’t quite fit the stereotype. People would ask me if I was sure.”

Dingley’s photographic project #Outcome has the dual aim of breaking down these stereotypes by showing that there are LGBT people in all walks of life, doing all sorts of things, while also giving young people hope that “it gets better”. His portraits show LGBT people with some attribute of their job or daily adult life, holding a photograph of themselves as a child. 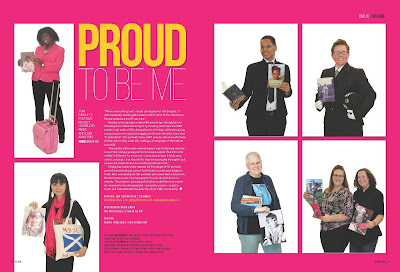 “Having the child photo seemed a good way of showing the transition from being a young person to being an adult. That bit in the middle is different for everyone – some people have it fairly easy, others not at all – but the point is that everyone gets through it and you can be someone and do something with your life.”

Dingley has successfully reached his first target of 50 portraits and will be exhibiting as part of both London and Brighton Pride. He is now aiming for 100 portraits and would then like to do a book. He also hopes to use the photographs for pop-up exhibitions in schools. The project is growing and Dingley would like more people to volunteer to be photographed – especially women – so get in touch and help celebrate the diversity of our LGBT community!

“Towards the end of my MFA at Goldsmiths, I developed a second self and his name is Gerrit,” says Mandy Niewöhner matter-of-factly. “He’s like my alter ego. He’s a really annoying man who thinks he’s a really good sculptor, which isn’t really true.”

Niewöhner, originally from the Netherlands, had gone to Berlin to take part in one of Diane Torr’s Man For A Day workshops. This is where Gerrit was “born”.

“In Berlin, he was ok. He was similar to me. But as soon as we came back to London, he felt he had to prove that he really was a man. He got this attitude.” 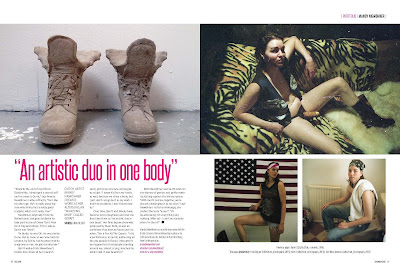 Gerrit walked into Niewöhner’s studio, tore down all her research work, got some concrete and began to sculpt. “I know it’s from my hands as well because we share a body but I just don’t recognise it as my work. I don’t do sculpture. I don’t know how to.”

Over time, Gerrit and Mandy have become more integrated and now she describes them as “an artistic duo in one body”. Her final degree show was produced by them both, as was an exhibition they took to Russia last October, This Is For All The Queers. “I did a performance as Gerrit, addressing all the gay people in Russia. I thought I’d be stopped but I had people standing around me, almost crying, touched by what I said. It was beautiful.”

Both Niewöhner and Gerrit work on the themes of gender and performativity, kicking against the binary system. “With Gerrit and me together, we’re already challenging it as we exist,” says Niewöhner. As for terminology, she prefers the term “queer”: “It’s all-embracing. It’s everything and nothing. After all – I can’t be a lesbian when I’m Gerrit!”

Mandy Niewöhner has recently been awarded the British School of Rome Fellowship residency for 2015 and will also be included in the Bloomberg New Contemporaries.

To see the full portfolio and enjoy the images, please see the July 2015 print issue of DIVA magazine

Gang rape and lynching; kidnap; forced labour: throughout history, women and girls have been subjected to terrible violence and repression around the world. More shockingly, in many places, it still goes on today. In her site-specific installation Shrine for Girls, New York-based artist Patricia Cronin (b1963) commemorates three such cases: the rape, murder and hanging from trees of three girls in India in June 2014 (the “mango tree rape case”); the kidnapping of 276 female students by the jihadist militants of Boko Haram in Nigeria in April 2014; and the many young women pushed into forced labour in the Magdalene asylums and laundries in Europe and North America from the late-18th century to as recently as 1996. These are represented respectively by piles of saris, hijabs and grey aprons, one on each of the three stone altars in Chiesa di San Gallo, Venice’s smallest church, now deconsecrated and serving as a cultural space.

Three shrines, each accompanied by a framed photograph, offering space for reflection, contemplation and remembrance; space for learning lessons; space for lamenting wrongs done and recalling these – and many other – young girls, whom Cronin considers to be secular or gender martyrs, since, unlike religious martyrs, they receive no otherworldly triumph.


To watch this interview, please go to: http://www.studiointernational.com/index.php/patricia-cronin-shrine-for-girls-venice-biennale-video-interview

Eileen Cooper (b1953) is a powerful presence at the Royal Academy this summer. An Academician since 2000, she was elected the first female Keeper in 2010. She has six works – in various media – in the annual Summer Exhibition and a retrospective of her drawings running simultaneously in the John Madejski Fine Rooms. A full-colour monograph of her life and works has also just been published. 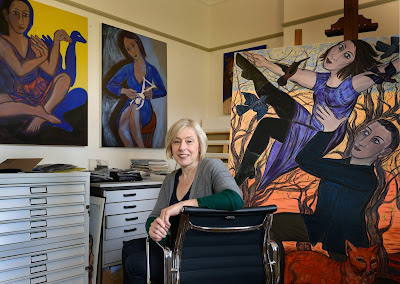 Born in Glossop, Derbyshire, Cooper drew from an early age. At 17, she undertook a foundation course in art at the nearby Ashton-under-Lyne College of Further Education and, from there, she progressed to Goldsmiths and later to the Royal College of Art. At a time when conceptual art and performance were de rigueur, Cooper remained true to figuration, soon discovering that drawing from her imagination, instead of from life, gave her a freedom to express and explore ideas and themes that became important to her. Her often large-scale, brightly coloured, primal and primitive compositions followed Cooper on her journey through womanhood and motherhood, with their motifs and content invariably overshadowing discussion of their formal properties.

To read this interview, please go to: http://www.studiointernational.com/index.php/eileen-cooper-interview-royal-academy-summer-show-2015