Review of Jane Fradgley: held at the Institute of Psychiatry, Kings College

Sometimes all a person needs is to be held: when she is scared, when she is sick, when she is lost. In the case of mental illness, it is not uncommon to feel all three of these overwhelming emotions at once, yet the instinct of many is to distance themselves from the patient in need, rather than to reach out and hold her. 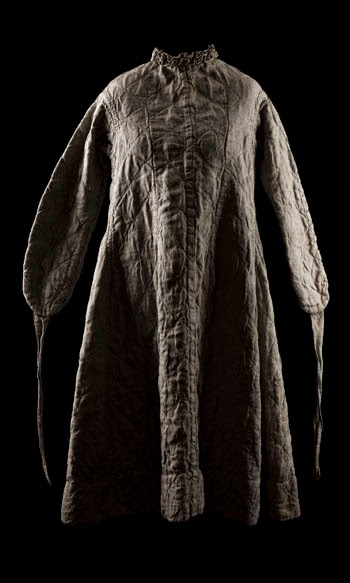 Review of The Birth of Cinema… and Beyond: An Exhibition of Painting and Video at rosenfeld porcini

Before the invention of cinema in the 19th century, visual art was one of the primary means for storytelling, alongside oral and written traditions. When Christians entered a church and saw a painting recounting a Biblical episode, they knew the narrative surrounding it so well that they could virtually see the action unfolding in their mind’s eye; similarly, Old Master paintings of Greek and Roman myths could easily conjure up vivid and dramatic denouements in the imaginations of their educated viewers. As the third of their annual themed exhibitions, Fitzrovia art gallery rosenfeld porcini, whose partner gallery, Galleria Napolinobilissima in Italy, regularly shows Old Master works, brings together newly commissioned works by seven contemporary artists and, for the first time, works from the directors’ collections by ten Old Masters, looking at the tradition of narrative artwork, both prior to and since the birth of cinema.

To read the rest of this review, please go to: http://www.studiointernational.com/index.php/the-birth-of-cinema

It is unusual to walk into a library and find the books laid out across the floor. It is even more unusual to do so in a Special Collections Archive, where the books and magazines in question are normally only available upon special request. But precisely this has happened in the Women’s Art Library, located in the Goldsmiths College Library Special Collections department, courtesy of Greek-born artist Christina Mitrentse (born 1977).

Originally established as the Women Artists Slide Library in the late 1970s, this artists' initiative developed into a fully-fledged organisation and research resource, becoming part of Goldsmiths College Library Special Collections in 2004. Its holdings include a significant number of early feminist art journals, such as Feminist Artists Newsletter (UK), Heresies (USA) and Matriart (Canada), alongside, of course, the complete nine-year, 92-issue run of what came to be known as MAKE, the library’s own publication of and for women's art, focusing on historical and contemporary women's art practice and highlighting both emerging and established international artists through previews, interviews, and feature pieces. 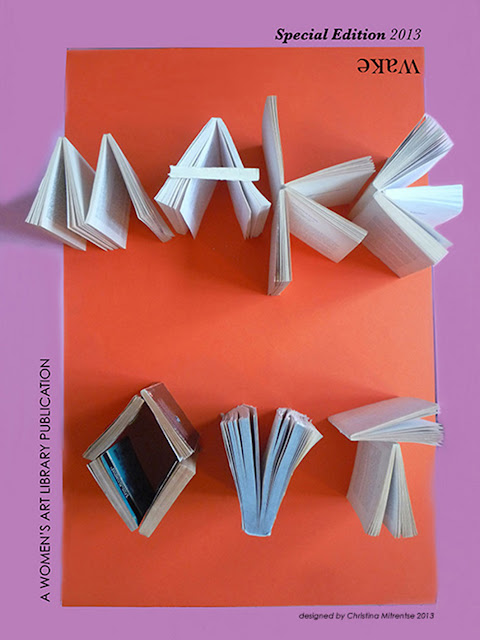 To read the rest of this review, please go to: http://www.divamag.co.uk/category/arts-entertainment/art-review-christina-mitrentse.aspx

Review of The Universal Addressability of Dumb Things at the De La Warr Pavilion, Bexhill

In recent years, there has been an increasing trend for artists to take on the role of curator, encouraged by a number of high-profile exhibitions, such as Grayson Perry’s The Tomb of the Unknown Craftsman at the British Museum (2012) and Hayward Touring’s series of artist-curated shows, including successes by Michael Craig-Martin, Richard Wentworth, Susan Hiller, Tacita Dean, Mark Wallinger and now 2008 Turner prize-winner Mark Leckey (born 1964). The idea of such exhibitions, according to Hayward Touring, is to open up new and unexpected approaches to exhibition-making, as well as to give special insights into the artists’ own deeper preoccupations. In the case of Leckey, the visitor is treated to a spectacular cabinet of curiosities, ranging across the categories of human, animal, and technology, exploring a mind that is as much scientist as it is artist, as much crazy inventor as it is mad professor. 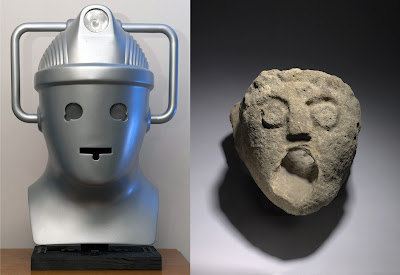 To read the rest of this review, please go to: http://www.studiointernational.com/index.php/the-universal-addressability-of-dumb-things

Turning the corner towards the ICA’s lower gallery this summer, the visitor finds himself entering the target range of an immense, phallic gun. This is sadly somewhat unsurprising, however, given the ICA’s apparent remit to present art which will shock: such extreme efforts to bamboozle have come to be rather commonplace within its walls. Indeed, this whole exhibition, consisting of works on paper by eight artists from the 1940s to today, seems hell bent on creating a scandal. Perhaps it is simply trying too hard, then, since, despite the serious intent of the artists to challenge weighty political issues such as war and feminism, I was left, to be honest, little more than bored. 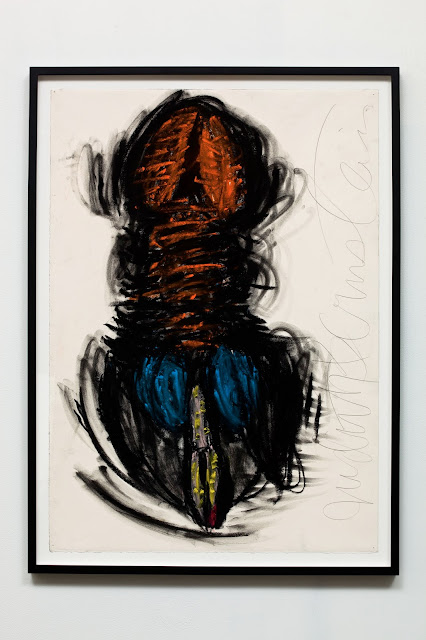 Unfortunately, there seems to be a belief that as long as it is making a political point, it doesn’t matter whether or not your art is any good; puerile scribbles will suffice. And this is very clearly the case with Judy Bernstein (born 1942), artist of the aforementioned gun, Fuck by Number (2013). The enormous drawing, in black charcoal and red paint, depicts an erect penis/gun, with its testicles as the barrel, shooting an American flag, and surrounded by statistics from the wars in Iraq and Afghanistan, showing their horror and futility. Around the corner are smaller charcoal drawings, likewise conflating sexual violence and acts of war, and littered with crude verses and scribbles like those you might find as graffiti in a public toilet.

Alongside Bernstein are works by Margaret Harrison (born 1940), recent winner of the Northern Art Prize. Her offerings are less violent, but no less explicit. In Good Enough to Eat (2) (1971), for example, a dominatrix is sprawled between the slices of bread in a sandwich, whilst in Dolly Parton/Allen Jones (2010), she kneels on all fours, supporting a table top, as in Jones’ own subversive sculptures. Turning the gender balance tables, there are also works like Captain America (1997), where the comic superhero stands astride, displaying a tiny penis and larger-than-life strap-on breasts. The graphic novel style of these drawings blends well with their mix of humour and biting critique of male power. 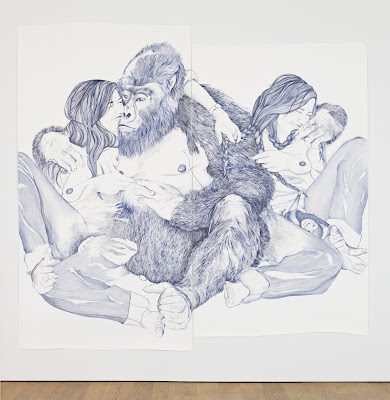 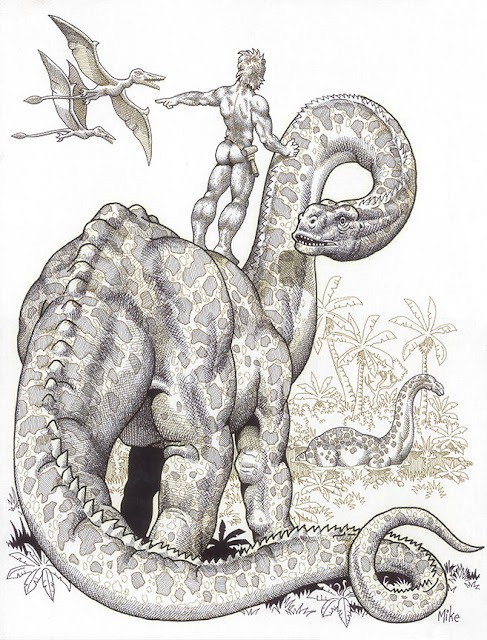 As the “old master” of social and political critique through art, George Grosz (1893-1959) also has a work on display: Stickmen Meeting Members of the Bourgeois (1946), in which a group of grey, lifeless stickmen are shown aimlessly following two fat, ruddy, sweaty members of the bourgeoisie, the contents of their bulging stomachs exposed to show plentiful beer and meat.

Antonio Lopez (1943-1987) has been credited with influencing the acceptance of diverse ethnicities into the fashion world, through his hedonistic drawings for New York magazines, whilst Cary Kwok (born 1975), who also trained in fashion, has filled nearly a whole room with biro drawings of men at the moment of ejaculation. This, to me, far from shocking, is merely mildly nauseating. 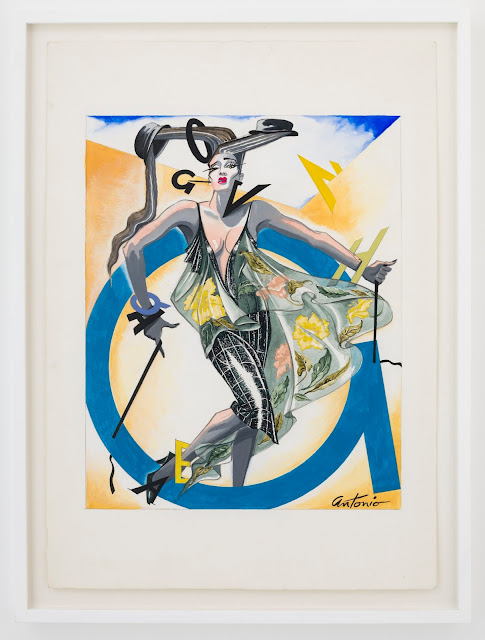 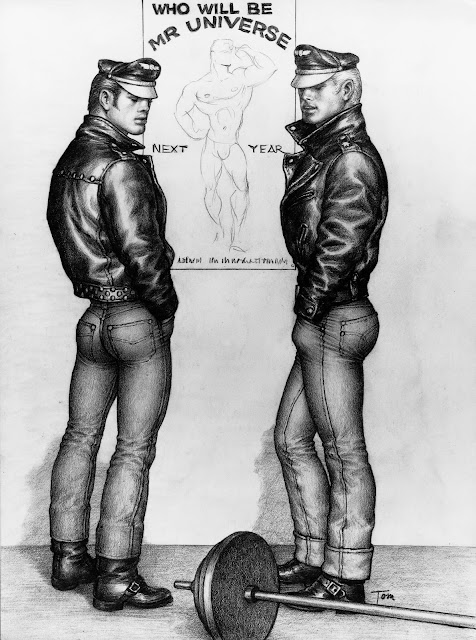 Indeed, this exhibition considers the crossover between the commercial and the aesthetic via the medium of drawing, as well as looking at how this has been used to voice political and critical opinion. In some instances, there is intricate detail; in others, childish scribblings. Quite why there needs, however, to be such an overbearing focus on the pornographically explicit, I am not sure. I’m all for freedom of speech and expression, and even for art that truly shocks, but, in this case I was just glad to reach the end.

ballpoint pen and graphite on paper
courtesy of the artist and Sikkema Jenkins & Co.