Review of Constable and Brighton at Brighton Museum & Art Gallery

When the painter and curator Peter Harrap moved to Brighton in 2010, he had just finished working on the Royal Academy of Arts’ exhibition No New Thing Under The Sun. A key work that he had been responsible for including in this exhibition was the sketchy, expressionist, and quite remarkable for an artist associated with finished arcadian scenes, Rainstorm over the Sea (c1824-28) by John Constable (1776-1837). It came as something of a surprise, then, when local history researcher and new neighbour Shân Lancaster came knocking at his door to let him in on her supposition that Constable himself has lodged at this very address – then 9 Sober’s Gardens, now 11 Sillwood Road – on a number of his stays in the popular seaside resort: between 1824-28, Constable regularly returned with family, in an attempt to aid his ailing wife’s health (she was suffering from tuberculosis). 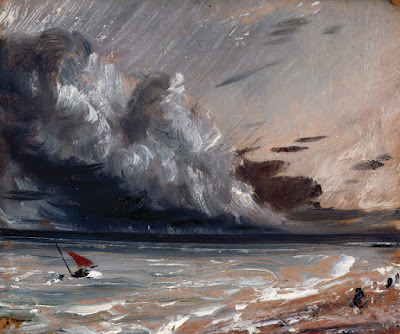 Intrigued, Harrap joined Lancaster on a mission to prove that this had indeed been Constable’s address. After much trawling through local directories, property deeds and Constable family correspondence of the period, they came across an uncatalogued letter in the Tate Archive addressed to Mrs Constable at this very address. In 2013, Richard Constable, the great-great-grandson of the artist, unveiled a blue plaque on the house. Sadly, having died in 2015, he is no longer around to enjoy this enlightening, thoroughly researched and scholarly significant exhibition co-curated by Harrap, showcasing more than 60 sketches, drawings and paintings made by Constable during those years, many in the “painting room” he created at Sober’s Gardens – now Harrap’s own studio – at the time doubling up as a bedroom for the cook, Mrs Inskip.