Tainted Love
Transition Gallery
4 – 27 May 2012
and
Meter Room, Coventry
8 June – 8 July 2012
and
Down Stairs at Great Brampton House, Herefordshire
22 September – 18 November 2012
“Love is an incurable disease […] In love, there is permanent suffering.” So said Marcel Proust, and, certainly, over the centuries, this is a belief which has been reiterated and propounded by many a broken heart. “We’ve all been crushed by love. No one can avoid the pain of a broken heart, unless, of course, they have no feelings.” Whilst love, in its pure form, ought to bring joy and happiness, it all too often springs forth in a less than perfect form – unrequited, impossible, fantastical, dark, obsessional – a desire for desire, and a desire to be desired; in Lacanian terms, the impossible need to fill the void inside, and the creation of an objet petit a, or object of desire, which can never be achieved.
The group exhibition curated by Corinna Spencer, currently on show at Transition Gallery, but due to tour to Coventry and Herefordshire later in the year, is a celebration, or perhaps a lamentation, of this kind of tainted love. The division of the gallery space with partition walls gives each participating artist his own space in which to divulge his private fantasy world, with an almost confessional overtone. With pinned up photos, collages, and shrines of devotional objects, however, a more sinister comparison might be with the cellar of the serial killer in any modern day psycho crime drama. Indeed, Spencer herself describes the exhibition as “a day-dreamingly dark installation questioning what it means to desire, cherish, seek, long, admire, envy, celebrate, protect or destroy.”
Some of the works are fairly innocuous, and purely an attempt to capture and preserve, or recreate, something beautiful, as, for example, Annabel Dover’s three simple and small painted studies of flowers and leaves, a homage to Victorian botany, and, in particular, her hero, Anna Atkins, daughter of the scientist J.G. Children. 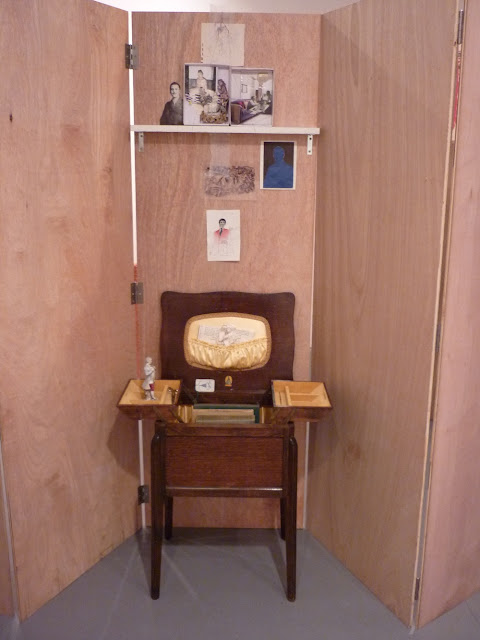 Others, also turning to traditional forms of art and craft, seek, perhaps, to create the perfect dream. Andrea Hannon, for example, has filled an open sewing chest with books, each one painstakingly carved into, with images cut out and intricately assembled into a relief installation, further adorned with hanging threads, like the yarns of all the potential tales which might unravel as we journey through life and love, creating our own stories. The work suggests a blurring of fantasy and reality, a Wonderland into which one could step, if only the drink me bottle of potion were available to make one shrink sufficiently. 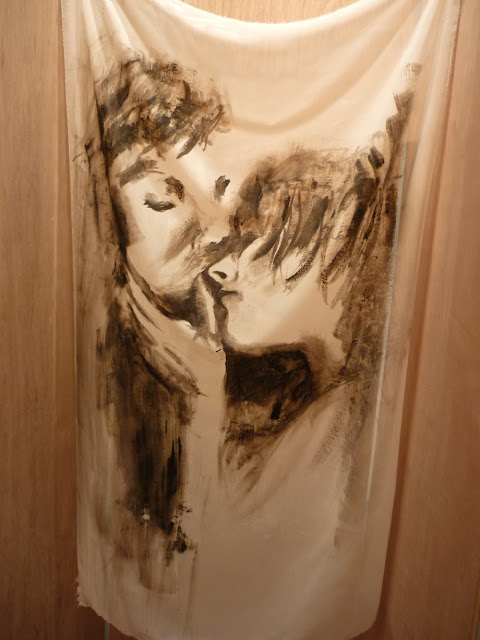 Equally fragile is Georgie Flood’s ephemeral white voile, daubed with an intimate black painted image of lovers’ faces resting against one another – suggestive of a transient, fleeting moment, but also one which has been captured and preserved forever. A pile of masks at its foot, however, disturbs the idyll somewhat with a painful reminder of spurned loves past. 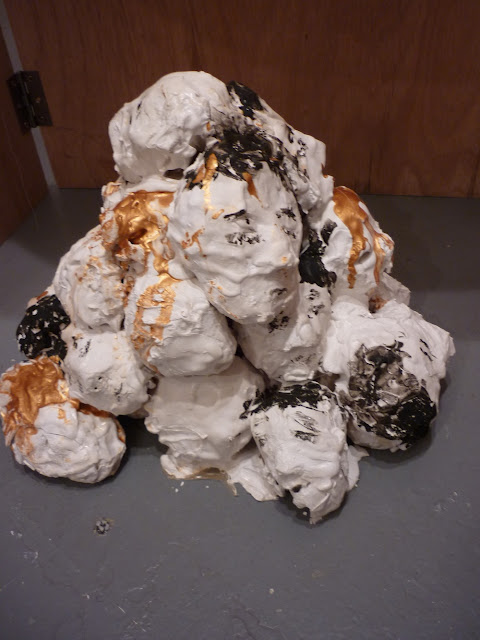 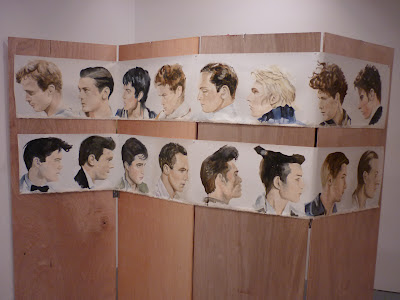 Alli Sharma’s canvases are based on the Smiths’ record sleeves from her youth. There is an intensity to them, inherent to adolescence, that period when emotions seem set to destroy, and, despite being confined to black and white, there is more depth and devotion to these images than any pyrotechnic firework display of coloured paint could ever convey. Simultaneously, however, they remain at a slight remove from present reality, creating a detachment, and rendering them the stuff of dreams and memories. 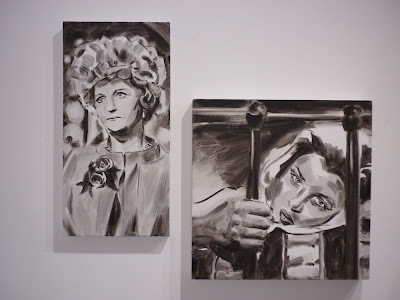 The most abstract work in the show is, undoubtedly, Alice Anderson’s series of columns of tightly bound copper thread, woven around personal objects of devotion which she holds so dear that she seeks to protect them and keep them entirely for herself. As with Voorsanger’s destroyed idols, this is symptomatic of an obsession which is on the verge of turning into mania and illness – an object has become so desired that if the devotee cannot have it himself, no one else can. To return to Lacan and the notion of unattainable fulfilment: the only way to truly possess something is to destroy it. And, as this exhibition reminds us, love that tainted can certainly be nothing more than a cause of permanent suffering. 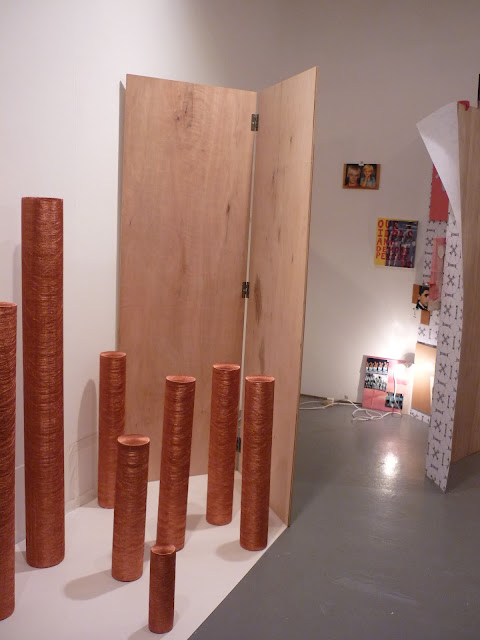