Liane Lang’s works combine a mixture of photography and grotesquely lifelike silicon and rubber sculpture. Having recently undertaken a residency at the Memento Sculpture Park in Budapest, where she found herself amidst the supersized discarded sculptures of heroes from the Socialist era, her new works, currently on display at Art First, play with scale, status, and the act of iconoclasm. 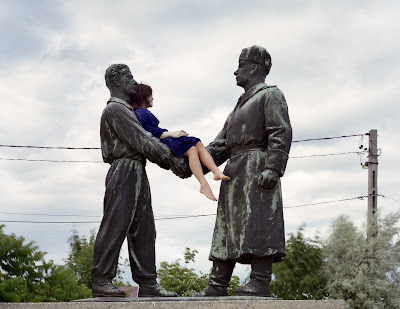 To view the vodcast, please go to: http://www.studiointernational.com/index.php/liane-lang-fallen
Posted by Anna McNay at 08:39 No comments:

Having originally studied mathematics, Gideon Koppel went on to gain a postgraduate degree from the Slade School of Fine Art, and is today something of a filmic polymath: a prolific film maker for cinema, television and art gallery exhibition, an award-winning director of film commercials, a Professor of Film at Aberystwyth University, and an Associate Fellow at Green Templeton College, University of Oxford. In 2008, he won The Guardian’s Best First Film Award for his feature-length work, sleep furiously, a portrait of Trefeurig, a small rural Welsh village which he moved to with his parents, age 13. For Diffusion 2013, Koppel will be showing a single-screen film installation at Chapter, depicting “the wild west Wales town of Borth.”

Review of Rachael House: A Space of Potential at Stratford Circus

Stratford Circus, a community-spirited performing arts centre located in the hub between Theatre Royal Stratford East and Stratford Picture House, is, in itself, an amazing venue. Its seemingly endless corridors and open spaces, diverging on various floors from an open central atrium, are dotted with tables and chairs, themselves occupied by anything from a bunch of local kids, using the space to hang out and listen to music, to business folks there for a lunchtime meeting. Currently, however, it is co-inhabited by an even stranger populace – a small army of cardboard dogs, or, at least, their heads. To read the rest of this review, please go to: http://www.divamag.co.uk/category/arts-entertainment/rachael-house-a-space-of-potential.aspx
Posted by Anna McNay at 18:16 No comments:

We are the camera. The title of one of f&d cartier’s previous exhibitions (2004), but equally an apt epithet for the Swiss artistic duo themselves. Having met at college at 20 years old, the pair built up individual careers – Françoise as a painter and sculptor, and Daniel as a black and white photographer – before entering into a shared dialogue in 1995, and uniting their creative practices with the collaboration, f&d cartier, in 1998.

As minimalist visual artists, they work with the two basic prerequisites for photography – light and photosensitive paper – opting mainly for camera-less techniques, often in combination with found objects. Their professed aim is to question everyday life, intimacy, the passing of time, and the position and role of the artist and the image in today’s society. 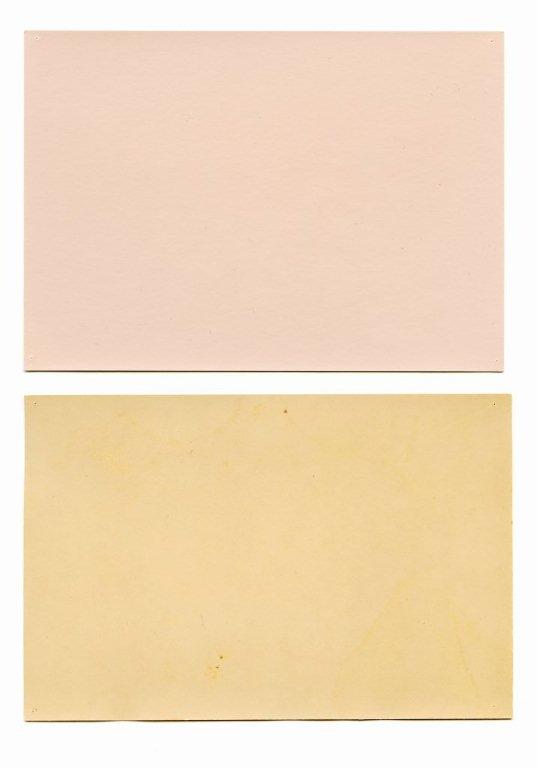 Henny Acloque (born 1979) has just returned from a trip to Mexico. Whilst there, she visited the Island of the Dolls, a creepy destination hidden deep amongst the canals of Xochimico, attainable only via a two-hour punt. All around, decomposing, mud-covered, limbless, ghoulish dolls hang from the branches of the trees, just as they were installed by the island’s one and only inhabitant, Don Julián Santana Barrera (died 2001). Despite having a wife and children, Santana Barrera chose the life of a hermit, living alone on the island. After the tragic death of a young girl in the canals, some half century ago, he began to fish the dolls from the water and string them up in an act of exorcism, seeking to drive away an evil spirit and allow the girl to rest in peace. The place is haunting and sinister, and clearly left a lasting mark on Acloque.

Acloque’s work has long been concerned with the desire to capture the past, present, and future simultaneously. Her interest in portals has lent it a haunted (and haunting) quality. And this new body of work, forming her third solo show with Ceri Hand, with whom she has been working for five years, explores this dimension still further. 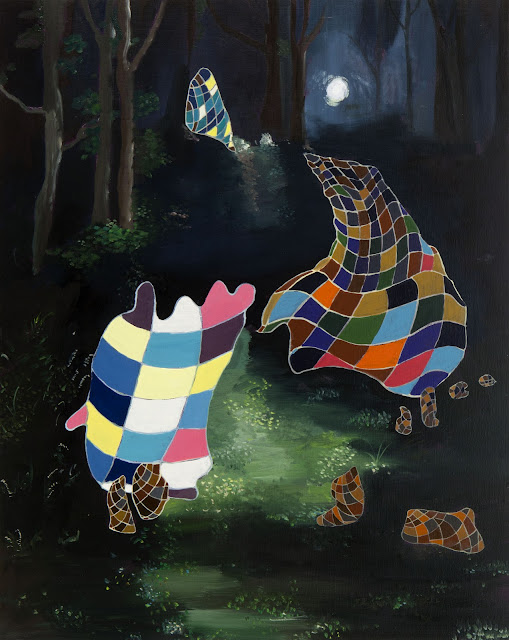 A restorer of Old Master paintings by day, and having been brought up in the countryside, it is unsurprising to find the basic substance of Acloque’s paintings to be fairly typical landscape scenes. In fact, the paintings in this exhibition are based more or less directly on the images from a Victorian book of fairy paintings she inherited from her father. Using, for the first time, oil on panel, Acloque then removes the ethereal subjects, replacing them with harlequinesque amorphous shapes, both implying and obscuring the presence of a subject: faceless and timeless, these new bodies exist in whichever realm one pleases. 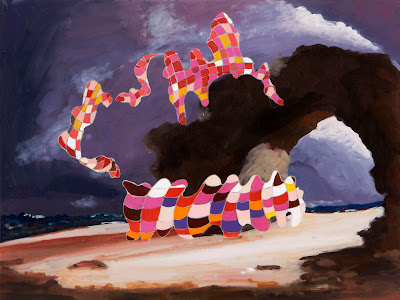 The titles of the works are intriguing also, apparently bearing no relation to their content. In fact, Acloque explains, they are the titles of whatever piece of music she was listening to whilst she worked – and that, she laughs, could be anything from an eclectic playlist ranging from classical to Fatboy Slim, the rhythms in each case affecting the way in which the paint hits the board.

Alongside the paint works, the exhibition also showcases a number of drawings and mixed media pieces forming a series called Quimbaya, named after the Colombian civilisation, famed for its work with gold. Built up on top of etched landscape prints, Acloque has turned the skies into harlequin patterned backdrops for a population of fluorescent and glittery horsemen and trees. Again, the subjects are rendered eerily indistinct, and there is a fairytale quality to these magical scenes. 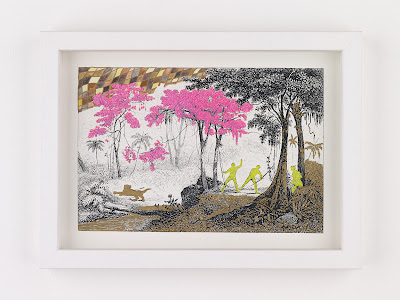 Acloque’s pieces are clearly working through extant ideas as well as the latest input from her travels. Whether or not these themes have now been fully exorcised, or whether they shall endure and continue to haunt her forthcoming output, remains to be seen.

“Life is a delicate balance. Drift in a perfect bliss of ignorance and you can find your personal Nirvana or find yourself lost. Structure our unpredictable lives and we harness our potential, achieve greatness or send ourselves to the edges of insanity.”

With this thought in mind, Alban Low set out on a unique project: he sent a proposal to 1000 artists and authors, asking them to analyse their lives and try to describe the personal systems which they employ to help them function at work and at play. The response he received was overwhelming and spanned poems, sculptures, collages, paintings, photographs, prose, and mini manifestos. 60 of these are now available for consideration by a wider public, in the resulting book, Patternotion: Life-changing Art, Art changing lives. 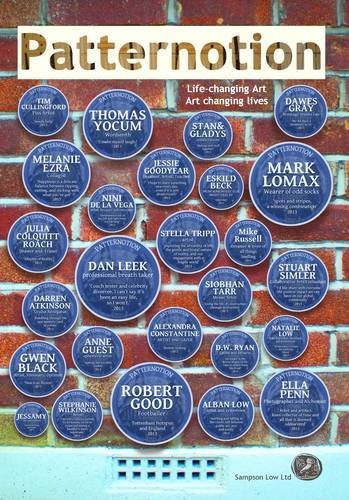 The book is split into two sections: the first containing the contributors’ systems, and the second containing the results of an experiment whereby nine of the contributors were asked to interpret and follow nine of the systems proposed by nine of the other contributors. The results are curious, and the interpretations very free – so much so that it makes me wonder how the proposers felt upon seeing their systems employed in such a different way. Having first been asked to bare their souls, it seems almost like a psychological rape, yet in these cases there was full consent, since the initial sharing was willing and voluntary. 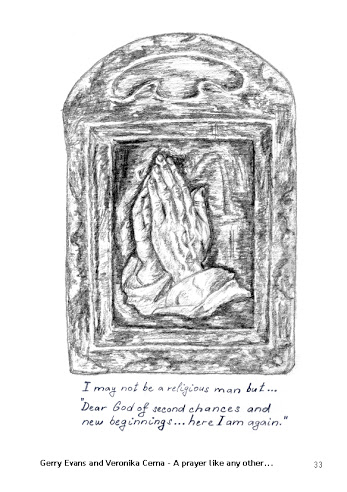 Only two of the systems proposed make reference to religion (Patten Smith’s God’s Script and Gary Evans’ and Veronika Cerna’s A prayer like any other…), and one offers up a modern day memento mori (Shona Davies' and Dave Monaghan’s Wheel of Misfortune) in the form of a steely water wheel with miniature hospital scenes filling the gap between each spoke, confronting viewers with “vision[s] of their potential fate.” 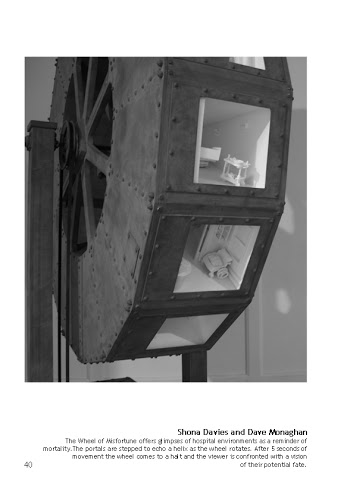 Dreams play a role in Mike Russell’s drawn call to record them and Melanie Ezra’s written response, and memories and mindfulness are also brought to the table. Decisions, attempts to change, and, unsurprisingly, New Year’s Resolutions (Ella Penn’s Two little words) form a basis for a number of the systems, and Robert Good’s flowchart (No Way) would perhaps be closest to my own largely imperfect system, currently in the process of being replaced by the motto “do, delay, delegate, dump.” 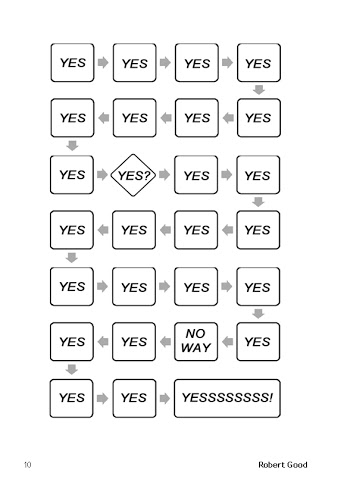 The system which made me smile the most was Catherine Steele’s Collected Philosophies of Jubilee Saffron-Beeton, and, for anyone else who remembers the Baz Luhrmann Sunscreen song, it will probably have the same effect. 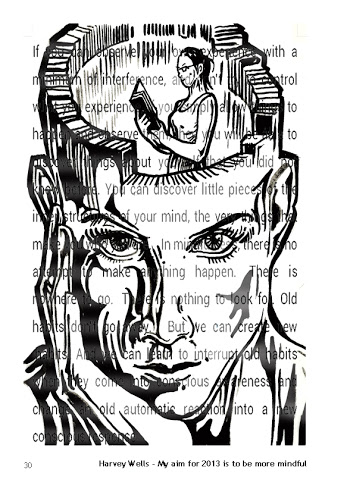 Overall, Patternotion is a charming little book, full of idiosyncratic responses, and soul-baring offerings. Some entries speak to me, others don’t. But, as Low concludes, “Patternotion is not a dramatic ‘do or die’ ultimatum of course, it is just a book. Read it though and the ideas inside could influence the next chapter in your life.” Who knows? Give it a try!

Shona Davies and Dave Monaghan
Wheel of Misfortune
© the artists

Robert Good
No Way
© the artist