Review of Portraying a Nation: Germany 1919–1933 at Tate Liverpool

In its 14 years (1919-33), the Weimar Republic – as the newly established German state was unofficially known – faced numerous problems, including hyperinflation, unemployment, political extremism (with paramilitaries – both left- and rightwing), and troubled relationships with the victors of the first world war. It was also, however, as is common in such periods, an era of remarkable cultural renaissance, a boom time for clubs and bars, and a phase of great creativity in terms of literature, cinema, theatre and music. Visual artists, too, responded to the sociopolitical climate, with Otto Dix (1891-1969) in particular combining realism and criticality with his singular artistic vision to produce paintings showing the manifold extremes of this tumultuous interwar period. 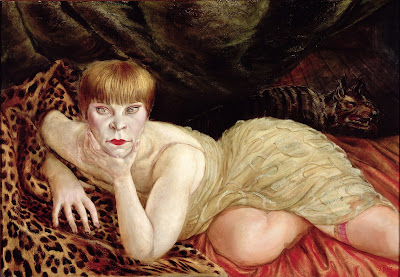 For this dual exhibition at Tate Liverpool, a selection of Dix’s work, primarily from his years in Düsseldorf between 1922-25, and including his barren series of 50 etchings The War (1924), is set against more than 140 photographs from the Artist Rooms collection of photographer August Sander’s monumental project, People of the 20th Century. Photographing subjects from all walks of life, and later categorising them according to his self-devised, ever-evolving system, Sander (1876-1964) produced an incomparable record – or collective portrait – of a nation in flux. Shown here chronologically, alongside an informative textual timeline, the gelatin silver prints set the sociopolitical backdrop against which Dix’s dramas, across the hall, play out. While each exhibition is strong enough – and large enough – to stand alone, together they provide a comprehensive and fantastic insight into the life and times, the ups and downs, and the joys and horrors, of the Weimar Republic.