30/08/16
Julie Umerle: An Exploration of Mark-Making
An essay on the occasion of
Julie Umerle: Rewind
AB Project Space
31 August - 10 September 2016

‘First and foremost, “mark” is a product as well as a process,’ writes Kelly Baum.1 ‘More specifically, it is an end that cannot be separated from its means.’ Marks may issue directly from the artist’s hand, via a brush or a palette knife in contact with the canvas, or there may be some attempt on the part of the artist to hand over control and distance him- or herself from the process. Even so, the resultant marks are the traces of an artist’s action. When Jackson Pollock poured his paint directly from the can, or dripped it from a stick, for example, his direct influence might have become less apparent, but, nevertheless, it was still his bodily movement that choreographed the encounter between paint and canvas. Harold Rosenberg spoke of the abstract expressionists as producing ‘events’ rather than ‘pictures’. ‘The painter,’ he wrote, ‘no longer approached his easel with an image in his mind; he went up to it with material in his hand to do something to that other piece of material in front of him. The image would be the result of this encounter.’2 For Julie Umerle, this assertion might hold in part, but, influenced by minimalism and post-minimalism as well as the ‘new American painting’, her work is an exploration of mark-making of many different types. 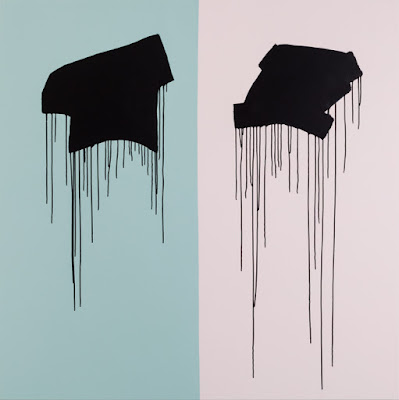 The works closest in spirit to the ‘encounter’ alluded to by Rosenberg are those in her Transoxide series (2015-16), built up on wet stretched paper with a coloured ground, as a successive layering of white paint and flicked splatters of ink. With the initial colour pulled across the sheet with a large brush, forming a ‘grid’, the accumulated layers veil this underlying order with their seemingly haphazard clusters. Suggestive of multiplying cells, reproducing bacteria, or dark stars in a bright sky, there is an element of the organic, echoed also by the splitting and cracking of the ink on the surface, varying in degree according to the specific mixture used in each case. 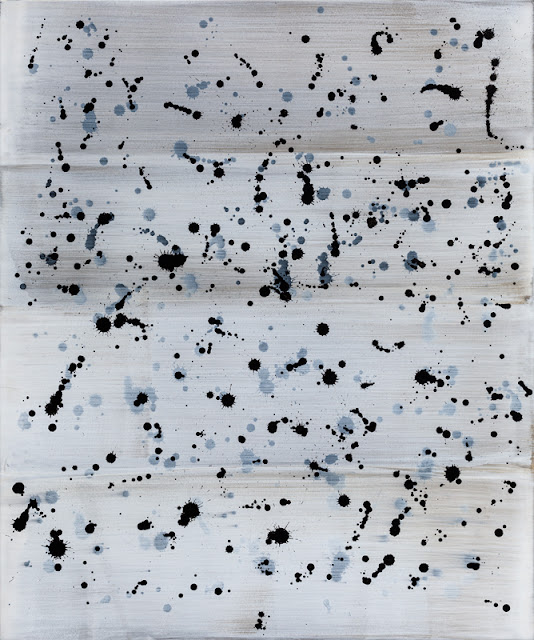 These paintings are an experiment, both in mark-making and materials, and typical of the way in which Umerle works: progressing from one piece to the next, continuing an idea, cycling through open-ended series, pushing boundaries and exploring elements that fascinate her along the way. The physicality of the medium and her attention to surface are countered, however, by a strong compositional element within the structure of the paintings.

Drift III (2016), for example, is a reworking of an earlier piece that got damaged. Attempting to recapture what it was she loved about the previous work, Umerle has, nevertheless, both subtly repositioned the looming black shapes, and, per force, submitted to the will of gravity and the pull of the paint itself as it drips down the canvas. Here, as is also the case for Naples Orange (2013) and Buff Titanium (2013), the drips result directly from the pressure of the brush as it is swept across the softly coloured, divided ground – an interesting contrast in terms of direct contact to the remote mark-making of the Transoxide series’ flicking approach, treading that fine line between directing what you want the paint to do and letting it do its own thing; between precision and chance. 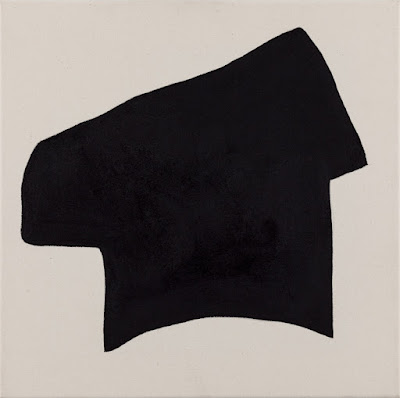 The Rewind series (2014-16) sets out to isolate and refine the marks from the Drift paintings, positioning them tightly within the square frame of an unprimed canvas, exploiting the pictorial space to the max. With the omission of the drips, the process is obliterated, and the mark-making becomes defined instead by technique. Similarly, the loss of action asserts both the flat forms and the flatness of the canvas itself. This is, as Charles Harrison termed it, ‘painterliness, freed of depicting function’.3 First in black, and then, in the later paintings, in red, the series invites the viewer to hit the pause button and observe in still meditation. With the black shapes, it is like looking through space, aiming towards infinity, while, in contrast, the red shapes appear to jump forwards, escaping the pictorial frame and entering the viewer’s own personal space. As the ‘painter of black’, Pierre Soulages, said: ‘It’s important to experience aesthetic shock, which sets in motion our imagination, our emotions, our feelings, and our thoughts. That’s the purpose of a painting and of art in general.’4 Umerle certainly achieves this, both by her stripping bare of these shapes – revealing the ‘nakedness’ that Robert Motherwell attributed to abstract art – and by the large scale of many of her works, which seem to shout out to you, compelling you to stop and look, engaging you in what Mark Rothko described as ‘an immediate transaction’, drawing you in ‘to create a state of intimacy’.5

Early in her career, Umerle was advised by Robert Ryman to avoid naming her works after feelings and, indeed, she describes her feelings as being shut off when she is at work, as she becomes engrossed in the creative process. Viewers’ responses are always subjective, and any associations they make, be they figurative or emotional, are entirely their own. The black Rewind triptych offers something of an enigma code, suggesting an order in which the hieroglyphs might be read, inviting the viewer to attempt an interpretation. Take note, however, that, as with the Holy Trinity, each of these three entities might be more than one thing at once and, overall, no satisfactory understanding might be attained: it is, perhaps, equally a matter of submission and belief. 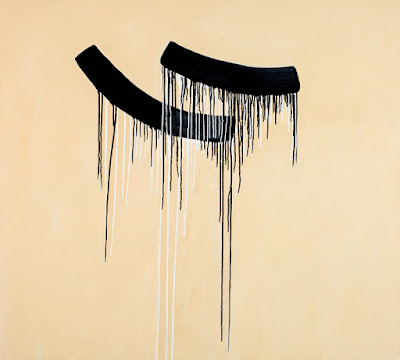 Just as Motherwell saw his work in terms of ‘a dialectic between the conscious (straight lines, designed shapes, weighted colours, abstract language) and the unconscious (soft lines, obscured shapes, automatism) resolved into a synthesis which differs as a whole from either’6, so Umerle’s work treads a similar path, proving that formal and spontaneous procedures are not necessarily incompatible and that mark-making truly is both a means to an end and an end in itself.

1. Kelly Baum, ‘Rothko to Richter/ Mark-Making in Abstract Painting from the Collection of Preston H. Haskell, Class of 1960.’ Essay to accompany the exhibition of the same name at Princeton University Art Museum, 2014. Available online at: http://artmuseum.princeton.edu/story/rothko-richter-mark-making-abstract-painting-collection-preston-h-haskell-class-1960 [Accessed 18/07/16]

All courtesy the artist

Heralded as the first female artist to paint a fully nude self-portrait, one might wonder why Paula Modersohn-Becker (1876-1907) is not more of a household name. Her short but highly fertile career – she produced more than 700 paintings in seven years (1900-07), working seven days a week, “with a passion that excludes everything else” – took place at a pivotal point in art history, and her trajectory from strict en plein air realism to a stylised, simplified manner, influenced and directed by her numerous stays in Paris, captures aspects of many of the movements of the time, while repeating personal themes and motifs to create a recognisable and cohesive oeuvre very much her own. A strong-minded character, Modersohn-Becker admired Auguste Rodin for his “disregard for conventions” and sought to follow suit. The low-angled compositions of many of her self-portraits allow her chin to be raised, conveying an attitude of defiance and air of pride, stating: “This is me.” 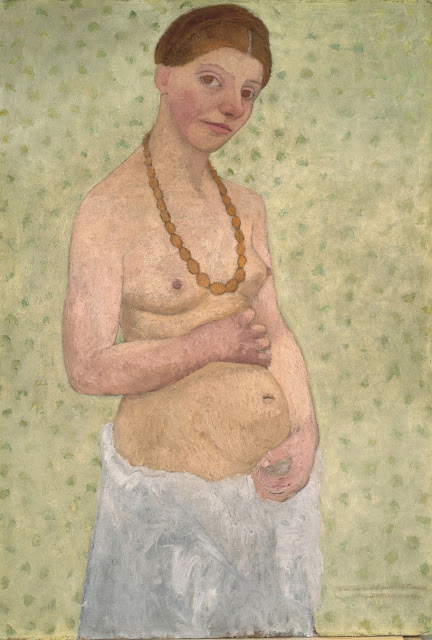 Read the rest of this review here

When one thinks of Georgia O’Keeffe (1887-1986), one inevitably pictures her enormous flower paintings, cropped close and magnified large, so that, as one might well think next, if familiar with the legend, that they look like female genitalia. Judy Chicago and Miriam Schapiro certainly perpetuated the idea of a “female iconography”, writing about O’Keeffe’s work in the 70s, but, already at the time, the photographer Alfred Stieglitz (1864-1946), also O’Keeffe’s husband, was propounding this interpretation, hinting at erotic content and offering psychoanalytic readings of her paintings. It is unavoidable, then, in writing about O’Keeffe, that the topic of female sexuality should be touched on, but it ought not to be dwelled on, since, take it or leave it as one possible interpretation of her work, it is but that. Certainly many of her paintings do evoke sexual imagery, but as Roxana Robinson points out in her biography of O’Keeffe: “The vulval imagery in O’Keeffe’s flowers […] is something for which botany should take the responsibility. Flowers do bear structural similarities to human reproductive organs, and this has more to do with the process of reproduction, both horticultural and human, than with the suppressed or expressed sexuality of an artist who paints the image of a flower.”1 O’Keeffe herself also always remained adamant: “When people read erotic symbols into my paintings, they’re really talking about their own affairs.” So, not only is this legend a myth, but there is so much more to her life’s work than just these particular paintings. 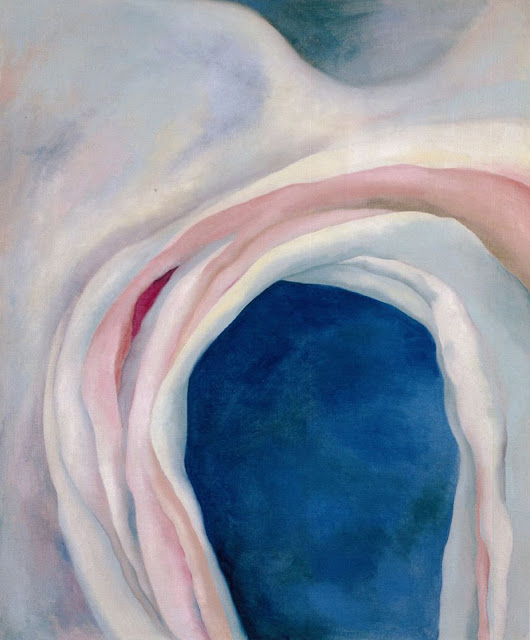 Lamia Joreige (b1972) is a visual artist and film-maker who grew up in Lebanon during the civil war (1975-1990). She makes work about her own and others’ experiences, creating a new collective history, aside from the one presented in the media. Using archival documents and oral histories, she interrogates the notion of truth and explores the aftermath of war in her city, Beirut. 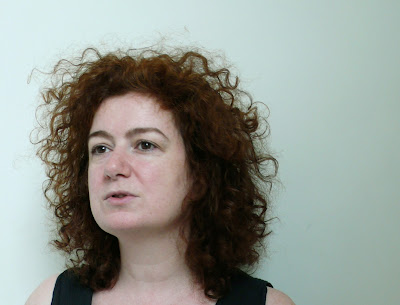 In 2011, Joreige’s work Objects of War [No 1 to 4, 1999-2006], a series of video testimonials and personal possessions, was the first major piece of Lebanese art to be acquired by the Tate Collection.

Joreige is one of seven artists to have been selected to show in the Artes Mundi 7 exhibition (21 October 2016 – 26 February 2017), the UK’s leading international contemporary art prize, from which a winner will be selected in January 2017, to receive £40,000, the UK’s largest monetary prize awarded to an artist. In the run-up to the exhibition in Cardiff (jointly held at the National Museum Cardiff and Chapter art galley, Cardiff), Joreige explained some of the concepts behind her work in a Skype call from Beirut.