The first thing that struck me as I walked into the main gallery area of the Henry Moore Institute in Leeds was the sticky sweet smell of candyfloss. Surely I was imagining things? But, no. Dennis Oppenheim (1938-2011) was an artist whose sculptural events, or processes, sought to encompass all the senses. With the tag-line “fireworks, flares and machines”, this small but comprehensive exhibition of his works, spanning the years 1972-86, investigates his use of these and other curious media (including candyfloss) as sculptural materials. 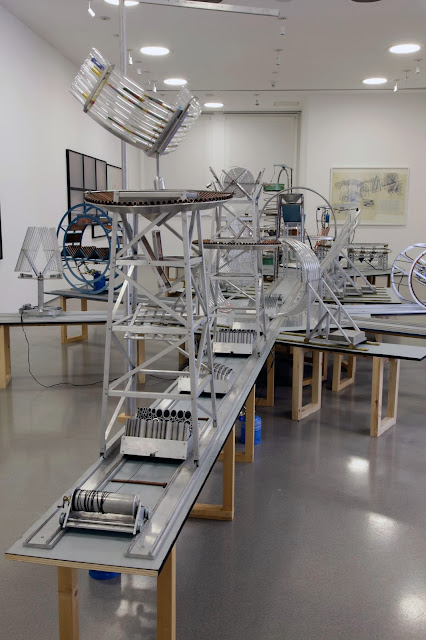 Becky Boston (born in London, 1985) is certainly a young artist to watch out for. Untrained except for an A Level in Art and History of Art, Boston took up painting seriously, after studying acting at the University of Tulsa, Oklahoma, in 2009.  She spent a couple of years experimenting with different media and styles, and then won her first solo exhibition, XXXY (August 2011), after entering Gallery 320’s Mindsoup competition to discover new up-and-coming talents. 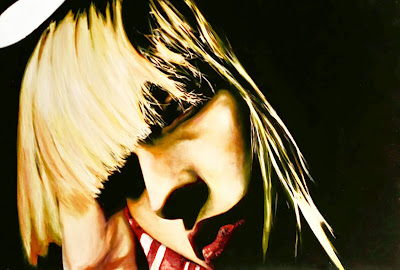 Her early motivations came from lesbian photographers such as Del LaGrace Volcano (previously Della Grace), Susie Bright and Jill Posener. Feeling a connection to their style, content and subject matter, Boston began to paint images from their books. Nowadays she works both from photographs and life, drawing inspiration from the people she meets daily in her East London stomping ground.

To read the rest of this profile, please see the December 2013 issue of DIVA magazine.

When colour film technology began to be developed around the turn of the 20th century, filmic representation of the world took on a whole new appearance. Early filmmakers employed a laborious method of hand-colouring black-and-white film, and Pathé Color adapted this method using stencils. In 1916, in the United States, Max Handschiegl and Alvin Wyckoff created a dye-transfer equivalent of this stencil process, known as the Handschiegl Color Process, which was first used in the film Joan the Woman (1917), directed by Cecil B. DeMille. 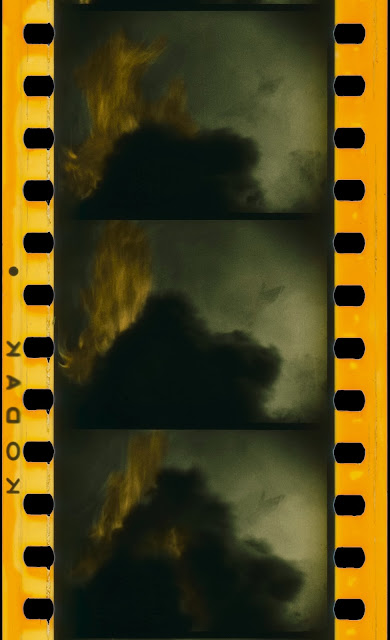 The invention of Technicolor in 1916 was a pivotal moment in cinematographic history, and it became the most widely used colour process in Hollywood between 1922-1952, bringing to life many well-loved films, such as The Wizard of Oz (1939) and Singin’ in the Rain (1952). Invented by a trio of men – Herbert Kalmus, Daniel Frost Comstock and W. Burton Westcott – what is less often credited is the key role that Kalmus’s wife Natalie had to play in her job as colour consultant. Working with her theory of ‘colour consciousness’, she would draw up colour scores for films as if they were music. Women were behind the success of the hand stencilling process too, with over 400 female employees working at Pathé’s Vincennes factory by 1910.

To read the rest of this review, please go to: http://www.photomonitor.co.uk/2013/11/colour-opponent-process-2/

On the surface of it, Chiara Williams and Debra Wilson, aka Boa Swindler, are truly chalk and cheese, not just to look at, but also in terms of their artistic style. Nevertheless, their joint dynamic has successfully been running WW Gallery for the past five years, with a flourishing programme of solo and group exhibitions, off-site projects, an annual SOLO award, and valuable surgeries for budding artists. Their current exhibition, however, is the first to bring together the pair’s own works, contrasting glamour with edge, the elite with the everyday, the surface with what lies beneath, all from the viewpoint of women concerned with their appearance, their bodies, and how society sees and accepts – or rejects – them.

Now in its sixth year, the leading platform for multi-media arts and entertainment, organised and hosted by North London based arts charity Wise Thoughts, has teamed up with UK Black Pride to once again offer its eclectic range of film screenings, music performances, creative workshops and a visual arts exhibition, along with this year’s additional attraction of a Bollywood party.

The theme for GFEST 2013, taking place at the Bernie Grant Arts Centre in Tottenham, a spectacular construction designed by David Adjaye, is ‘Art Riots – positive contributions by diverse artists in the community.’ This focus on ‘Pride in Diversity’ is an especially fitting tribute to the late MP Bernie Grant (1944-2000), in whose memory the arts centre was built, because he was a strong supporter of equality across the board, including for LGBT communities. 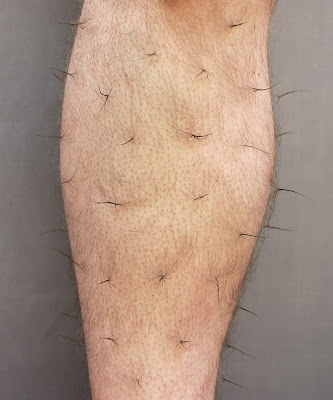 The festival opens on Thursday 7 November with ‘Riot of Colours’, a visual arts exhibition featuring graphic illustrations celebrating the achievements of the Stonewall riots in New York by Beldan Sezen; documentary portrait photography of LGBT families by Marta Kochanek; some dark images exploring sexual identity by Jason C Woodson; comics reinterpreting the signs of the zodiac by Sina Shamsavari aka Sina Sparrow; and a curious series of work exploring the nature of our expectations by Simon Croft. The exhibition runs for the duration of the festival. 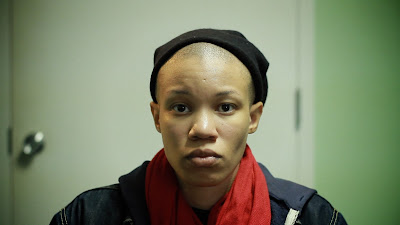 On Friday 8 November, there will be an evening of film premieres. Following a number of shorts – Bumming Cigarettes, Miss Nizhoni, Hide and Seek and My Genderation (Alice) – viewers can enjoy the feature-length documentary, ‘The New Black’, by Fulbright Award winner Yoruba Richen, which tells the story of how the African-American community of Maryland is dealing with the issue of gay rights. 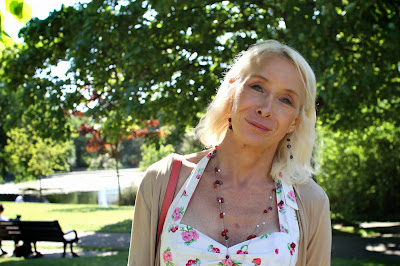 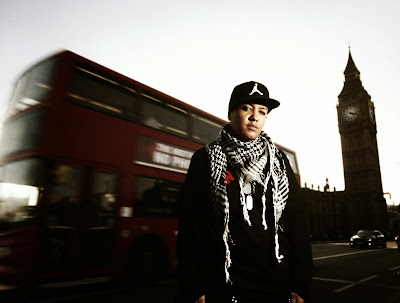 Four creative workshops will run across the festival under the theme of ‘Learning from Riots.’ These include a social media workshop, a filmmaking workshop, a creative writing session and a drama workshop.

Finally, things will end with a bang on Saturday night, with the GFEST 2013 closing party ‘Bollywood Blast’. Offering a mix of Bollywood, Bhangra and House music, dancing will go until the early hours.

The central ethos of GFEST is ‘equality in all walks of life,’ and by teaming up with UK Black Pride, and hosting the events in a venue built in honour of such a worthy man, this year’s festival looks set be the most successful yet. As Kochanek reminds us: London needs this kind of event to bring together many LGBT artists in one place. Get your tickets now!

Also published at: http://www.divamag.co.uk/category/arts-entertainment/gfest-teams-up-with-uk-black-pride-for-2013.aspx
Posted by Anna McNay at 20:01 No comments:

At the end of an uninviting alleyway, behind Kings Cross, lies a large warehouse, now HQ to a collective of independent filmmakers and artists known as Dog Eared Films. On the first floor of this building is a part-time gallery space, currently home to Alisa Gallery, and showing some 30 photographs by young artists from London and Paris. Presented as documentary, in the styles of Larry Clark, Gus Van Sant and Nan Goldin, really they are little more than enlarged party snaps. Either way, they are certainly a portrait of a generation: the Instagram generation. As one of the exhibitors, Hannibal Volkoff, notes: ‘Lived exhibitionism is the new moment.’ 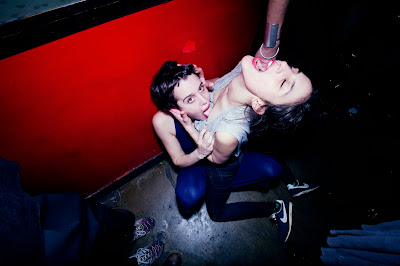 Using a carefully balanced combination of PVA glue and acrylic paints – the precise measures of which only he knows – Jonathan Gabb is a painter with a difference. Starting out with vast sheets of pure colour in huge trays on his studio floor, his finished works are something between painting and sculpture,  a joyous celebration of colour and material.

At the opening of Jonathan Gabb's exhibition at A Brooks Art, we spoke to him about his work. 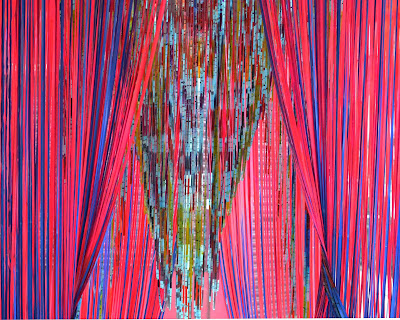 To watch this video interview, please go to: http://www.studiointernational.com/index.php/interview-with-jonathan-gabb

Review of Sarah Jane Moon: Portraits at 5th Base Gallery

The current recipient of the Royal Society of Portrait Painters’ Bulldog Bursary, Sarah Jane Moon, only became an artist in recent years, after arriving in the UK from her native New Zealand (via Japan, Australia and Malaysia). Taking a Diploma in Portrait Painting at the Heatherley School of Fine Art, where many of the tutors come direct from the Slade, trained her in a traditional manner, with focus being placed on perspective, drawing, and studies from life. Even before her course was over, though, Moon was beginning to rebel, and, in working from a photograph, she flouted the rules, but, at the same time, discovered a freedom which allowed her to see the resulting work more as a whole, with equal focus on objects behind the figure, rather than just as a sketch of the figure itself. For Moon, a portrait is about much more than just the head and shoulders of the sitter: it’s about the whole body, its posture, its location, and the belongings which hold significance for this person, speaking of his or her interests and concerns. 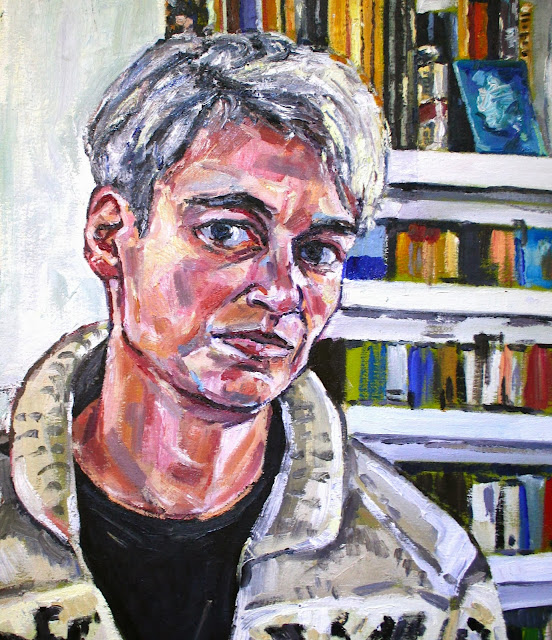 To read the rest of this review, please go to: http://www.divamag.co.uk/category/arts-entertainment/art-review-sarah-jane-moon.aspx