‘I don’t do art to make everybody like me and I don’t have any problems with people not liking my work.’ For an artist who has more often than not courted controversy with his paintings, films and installations, this is doubtless a good thing. A lesser character might have kowtowed to criticism and given up his art-making, but not Bjarne Melgaard. ‘I believe in freedom of speech. I don’t see my work as very mainstream, so when I get reactions saying it is stupid, everyone is entitled to their opinion. But I am also entitled to my opinion. As long as you know yourself what you’re doing, and you’re convinced about it, then you can handle anything.’

Melgaard’s current exhibition, which opened on 23 February at Galerie Thaddaeus Ropac, London, is by no means as controversial as many of his earlier offerings – which have seen him variously accused of racism, paraphilia and paedophilia. Showing alongside an exhibition of works by Sturtevant, Melgaard’s solo show – his first with the gallery in London – sees the 17th-century Ely Room filled with a suite of 14 new paintings, Bodyparty (Substance Paintings), each 180x180cm. Because of the age of the building, the heavy canvases could not be hung on the walls, and so they stand about, propped up on marble blocks. Melgaard, however, likes this ‘improvised’ feel, echoing the ‘casual easiness’ with which the works stand on the floor in his studio, and describes the whole coming together of the exhibition, proposed to him ‘at very short notice’ by Ropac’s new senior global director, and former director of Serpentine Galleries, Julia Peyton-Jones, as ‘very organic and very fast’.

Read the full interview on the Norwegian Arts website here

In Conversation with Alan Rankle

In Conversation with Alan Rankle 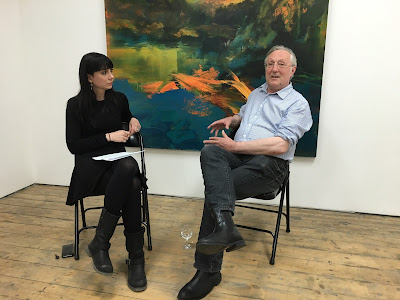 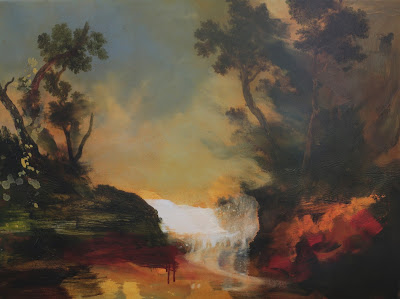 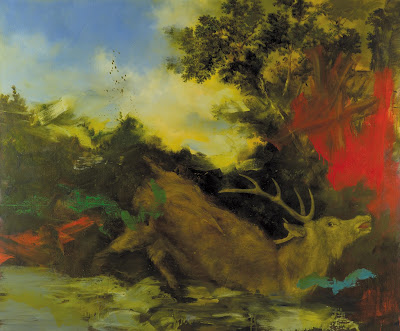 MO’R: Alan, the painting of the deer, is there a direct link with Monarch of the Glen?
AR:      I recall Monarch of the Glen as the kind of art that I’m not so interested in. The apotheosis would be Peter Blake painting a pop version for Paul McCartney – how unreal is that? I did have an experience, though, when I first began the Running from the House paintings. I was in Copenhagen and my friend Bjarne Neilsen came into the studio, took one look, and exploded into laughter – he said ‘You can’t do that here, not in Denmark, it’s only two years ago that everyone threw their antique stag paintings in the skip!’ I’d thought of my take on deer paintings as a comment on how society relates to nature, yet on reflection I should own up. I also had a commission to make an unapologetic, monumental stag painting for Marco Pierre White to hang in a restaurant. So I guess I did my own pop version, just like Peter Blake.
MO’R: What’s this stag doing for you, the other one next door?
AR:      Well, it’s about everything I’ve said: the chaos and the sense of anxiety in nature… and then, I suppose, it’s about sex… [Laughter] …if I’m really answering the question. It’s a fairly esoteric thing, yet you know that energy flows out of and around your body when you’re highly aroused, and don’t you think there’s often a kind of antler effect that comes out of people at those moments – like a subtle lightning you can see flashing around the person – and it’s like antlers?
MO’R: Well, the stag was kind of Shamanic in Celtic culture.
AR:      Yes, and also in stories about Herne the hunter and the stag. I think there’s a lot in those myths, these stories go back to very early times. I think they have meanings that are more fundamental than commonly thought. I’m making some works based on the Titian paintings Diana and Actaeon, and The Death of Actaeon where the Greek myth seems overly simplistic to me and just not right.
The idea that there’s a young shepherd, who inadvertently comes upon Diana and her nymphs bathing and so she immediately turns him into a stag and hunts him, kills him and the dogs eat him..  it’s like a cartoon.. I think the myth was originally about deeper things than punishing an accidental voyeur, suggesting symbolic ideas about men and women that come from a much earlier time. I had the mad idea that by painting and drawing this I could  somehow get an insight into the meaning of the myth. So, it’s an ongoing project.
MO’R: Well, good luck with that!
AR:      Thanks! I’ll try my best.
[Laughter]
AMc:    You couldn’t say more to follow up on that. Thank you, Alan.

Images: all © the artist

Also published in the International Times