Review of Frida Kahlo: Making Herself Up at the Victoria and Albert Museum, London

Everyone knows something of the tragic story of Frida Kahlo (1907-54) – the polio, contracted when she was six, which left her right leg thinner than her left and caused her to limp; the accident, when she was 18, the after-effects of which reverberated throughout the rest of her short life, forcing her to undergo multiple operations and spend much time bed bound; her tempestuous relationship and on-off marriage with the Mexican muralist Diego Rivera (1886-1957); her affairs with Russian revolutionary Leon Trotsky, as well as with various female friends; her now iconic monobrow and her unconventional and folkloric style of dress – and there is a flourishing yet morbid fascination with her tale. Children around the world wear flowery Frida-style hairpieces; teenage girls have Daft Punk Frida T-shirts; even grown men can be spotted with Frida socks. There are also numerous self-help-style inspirational books in which Kahlo stars as role-model-cum-heroine. 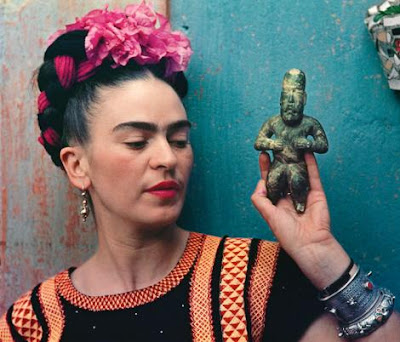 Thankfully, her artworks are recognisable, too – at least, her self-portraits are known through multiple reproductions, even if often distorted and graphicalised into a contemporary branded derivation. Sadly, encounters with the works themselves are rarer, and, having read reviews of this much-hyped and long-awaited blockbuster exhibition at the Victoria and Albert Museum, they were not something I was especially banking on encountering. The focus is, instead, on Kahlo’s biography and, principally, the treasure trove of artefacts and paraphernalia uncovered, when, in 2004, the seal was broken on the bathroom in her lifelong home Casa Azul (the Blue House, in Coyoacán, south of Mexico City – now the Museo Frida Kahlo), which, for 50 years following her death, had been kept locked, as dictated shortly before his death by Rivera. Nevertheless, true art fans needn’t despair or indeed avoid the exhibition altogether, for there are enough paintings to render the battle with the crowds worthwhile, even if you may ultimately leave with somewhat mixed feelings.