Tongue-tied I am bound
To weave my words with thistledown
Sickle moon on the moor
Turns thistledown silver and fingers raw[1]
When Judith Burrows is scouting for locations in which to shoot the album artwork for folk musicians, she looks for places that relate to the concept and where she feels there is a narrative she can develop, be they urban, rural, coastal or in a studio. This work is her bread and butter, but it also feeds into her life and soul: making mixed media paintings and collages, which develop these stories.

Taking these scenes as her starting points, she builds them up like storyboards, painting in further detail, overlaying negatives, collaging in text, music score, lyrics or contour lines from a map. Some details may be temporary – a piece of graffiti, a painted hoarding, or an eroded coastline. It is these chance presences, however, which combine to create the contingencies of Burrows’ imagination, shared on paper or canvas, offering a multitude of dramatic narratives within a single image. 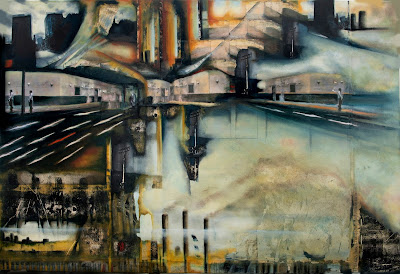 The characters in these improvised scenarios are random passers-by; anonymous, genderless strangers who resonate with Burrows’ own search for, and sense of herself. They become entangled in the yarn and are repeated, often myriad times, suggesting all possible permutations and outcomes – the “what ifs” of paths that may or may not be trodden.

Titles are taken from song lyrics, literature, found text or sometimes from the locations themselves, such as On Great Eastern Street, where she shot a magazine cover of Billy Bragg. The words encapsulate what Burrows is feeling as she paints: the new narrative that comes out of both the original shots, and the repetition and layering of possibility.  … And again … memories with no words ... again and again or It was written, I should be loyal to the nightmares of my choice, which came from Joseph Conrad’s Heart of Darkness and, at a time when Burrows was having intense and vivid nightmares herself, “just seemed relevant”.

Exploring the unique resonance of each particular place and the narratives we weave into and around them, Burrows’ works unravel layers of emotion, both known and unknown. “I think I’m quite intense and the paintings are quite intense,” she admits. “That intensity is part of who I am. It’s a search for meaning.” And this search, she continues, intensifies as you grow older and question more deeply: “What is this all about?” Along the way, Burrows accumulates strings of words and images, like a magpie, she tears things out of papers and stores them until they find their place in a work. Even after something is theoretically finished, she has been known to go back and add further detail, further twists and turns to the plot. 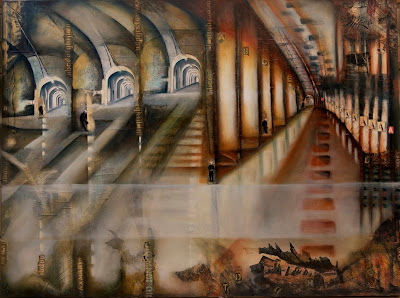 Burrows’ works are not framed, because they are never truly finished. The story continues even after the narrator ceases to narrate. She stretches her works after she has painted them, so often the painting will continue beyond the frame, turning round the corners of the wood, disappearing beyond the line of vision; other times she will need to fill in an unexpected blank space. One individual image can say an awful lot, but there’s always more to it than meets the eye.

Burrows studied film and photography and her early career was in filmmaking, writing and directing dramas and producing documentaries, including for the National Portrait Gallery. One film, Pulse, was screened against the exterior wall of the National Theatre, with sound emanating from speakers along the Southbank. But Burrows always described her film work as “very painterly”, just as now she describes her paintings as “somehow photographic”. It was looking through her library of photographs that made her realise that she had a vast archive of possible material for paintings ready to hand. Now, when she goes on music location recces, she takes extra shots with her old, wide-format, analogue camera. Working from these scenic inspirations, Burrows – along with her anonymous figures – becomes a part of the image: “And that’s something you can’t do on a screen,” she says. “You’re removed from the image when you’re working on a computer.” Hers is a process of perpetual distillation. As she scouts for her filmic and photographic locations, she zooms in, freeze-frames that transient moment, and then zooms in further, taking a still smaller frame, from which to build up a new narrative, under close scrutiny. She describes a feeling of seeing beyond: through the lens, along the alleyway, and through the arches…

The sepia colour scheme of her paintings was not something Burrows was consciously selecting. She describes her palette as “earthy” and “intuitive”, adding: “I like colours that aren’t quite true, that are slightly dirty, slightly worn – they’ve had a life of their own”. Typically, in her photography, she will desaturate the tones, yet, in her paintings, there are swathes of bright, white light, strong bursts of colour, against an otherwise muted setting: the browns and ochres, oranges and turquoises feel somehow inverse, recalling negatives, suggesting potential and mystery: an image not yet developed, an ending not yet written.

Santander, the sky is falling
The tale we told each other has an end[3]

In the case of Judith Burrows’ paintings, however, one might never reach this conclusion. For the tale she tells, it has no end…


[1] Lyrics from Tongue-Tied by Emily Portman
[2] Lyrics from Finisterre by Ian Telfer, © Complete Music 1990, from the album Ashore by June Tabor (Topic Records 2011), for which Judith Burrows shot the artwork
[3] Ibid