17/10/11
Liane Lang: House Guests
WW Gallery
6 – 22 October 2011
For those weary of the bright lights, vivid neons, and white cube displays of Frieze week, why not take a trip across to Hackney and enter the dark, brown-walled interior of Liane Lang’s House Guests installation piece at WW Gallery: a “museum to the individual”, in this instance, the well-known, if ambivalently received, author Rudyard Kipling (1865-1936). 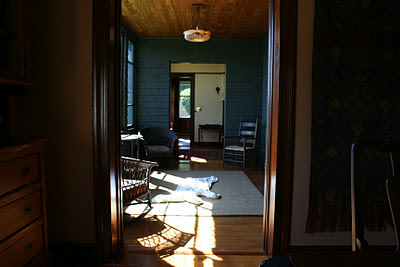 A graduate of both Goldsmiths and the Royal Academy, Lang, who works primarily with sculpture, photography, and video, began this project when she stumbled upon internet pictures of Kipling’s self-built house, Naulakha, in Vermont. She began to read his work and became increasingly interested in his own life story. Intrigued, Lang went to spend a week at Naulakha, planning, initially, to take a series of photographs. Once there, however, she became so captivated that her project turned into a full-scale animation film and installation.
“Kipling led such an ambiguous life,” explains Lang, “and I wanted to bring some ambiguity into the installation.” The gallery space is divided into three main parts, and, upon entering, visitors have first to readjust to the gloaming darkness of a dim interior, complete with Persian rug, bench, perpetually ticking cuckoo clock, mocked up death mask of the man himself, and small bookshelf holding the “expurgated version” of his complete works, leather bound and decorated with the left-facing swastika, common on many of his older editions, and deriving from the Sanskrit, meaning “auspicious object”.[1] I say “expurgated”, since one volume, the ghost stories volume, is absent. And this is by no means happenstance. Lang found Naulakha to be quite eerie, alone there in the company of her own copy of this missing volume, and she seeks to convey this ghostly or spectral presence in her work.
The film is projected on to stacks of paper, a gesture, perhaps, towards Kipling’s profuse output during his time at the house. The 3D nature of this “screen” leads to an interesting interaction between structure and image, producing a sculptural object of its own. This technique of projecting on to something physical began by accident when Lang was watching footage in her studio, and was trialled last year in an installation in a shipping container in a Dalston car park.  The fissures running through the image create a “cracking” effect, which Lang enjoys both “visually and conceptually”.
Indeed, this sense of brokenness, of age, and of disrepair, resonates throughout the film itself. Opening with a view of the house from outside, glimpsed through swirling mists and to the sound of a rasping wind, it appears eerie and deserted, and, already, one feels a sense of intruding. We then penetrate to the interior, where we bear witness to a figure, seemingly unaware, writhing in a bedspread. To the sound of growling, a small plaster cast wolf statue takes to life: “Animals are so central to Kipling, it was only a small step to animate one of them and use him as a vehicle through the house.” So, we proceed at a low level and hurried pace, to the accompanying noise of scurrying feet. Out on the veranda, a figure, shrouded in a sheet, rocks back and forth on a rocking chair. Crickets, birds, the creaking of the door as it opens, seemingly by itself. And, in the blink of an eye, the figure is gone. This is to repeat itself indoors, on the sofa. Furniture creaks, books and clothes move by themselves. A hand appears polishing the banister, and the door of an iron stove taps and its hinges squeak. Signs of familiarity, but distorted and empty. A lifetime past. Ghosts of what was. 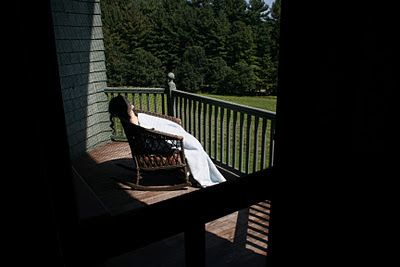 The figures in the film are not real. Lang makes them out of rubber or silicon, and they appear in many of her works. There is a deathly pallor to them, and often their cast lines remain visible, suggestive of scar tissue. Their sudden disappearance, along with the general jerky motion of the film as a whole, is achieved through the use of time lapse, which Lang believes endows the work with a performative aspect.
In the second main room, still part of the Naulakha installation, we find a wall hung with objects – mainly carved animal and human heads – collected from countries which were part of the British Empire, and which Kipling himself visited and wrote about. Named The Burden of Objects, after Kipling’s Imperialist poem The White Man’s Burden, these “pieces of colonial kitsch” form what Lang terms her own “found sculpture”. Beside them is a small shelf with a miniature writing desk, the closest she could get to Kipling’s actual roll top model, complete with green glass lamp and candles. This is surrounded by tin soldiers: some have suggested that Kipling’s patriotic representation of camaraderie in the ranks might have been partially responsible for the large number of boys who signed up to fight in the First World War.
The final room is a shocking contrast. Opening out with huge bay windows over Hackney Downs, light floods in, and the visitor steps back to let her pupils adjust. Inside hang just three photographs, taken in an old cottage, which Lang took to refer to the boarding house in Southsea to which Kipling was sent to live as a child, when his parents feared he was becoming “too native” in Lahore. Equally haunting, their bright white interiors open out on to views up a staircase and into bedrooms, flooded with a strange dusky pink light, or an other worldly presence. In one, a Gothic shaped mirror reflects a portrait on the opposite wall, and a mist swirls above the bedspread.
Interestingly Lang doesn’t believe that ghostly presences are inherent to old houses, and regardless of strategically placed objects attempting to conjure up the spirit of past residents, one need only look at the tired and bored expressions of many a visitor traipsing through a National Trust property in search of the tea room, to see that a certain amount of imagination is required in order to glimpse an image of the former inhabitant’s life. As a “house guest” of Kipling’s, however, privy to the strange ongoings of a now (semi-?)deserted house, I really did feel as if I’d travelled not just to Hackney, but all the way to Vermont.
[1] Kipling later ordered this feature to be removed lest he be mistaken for a Nazi supporter, following Hitler’s reappropriation of the ancient symbol. Unfortunately such false rumours nevertheless persist.
For further information and details of opening times, please visit the WW Gallery website.
Posted by Anna McNay at 18:16